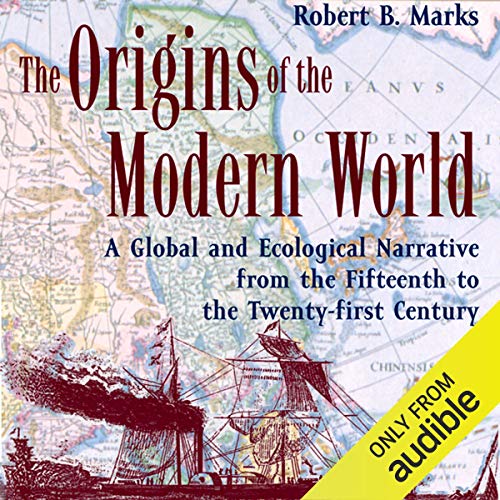 The Origins of the Modern World

By: Robert B. Marks
Narrated by: Michael Sears

This clearly written and engrossing book presents a global narrative of the origins of the modern world from 1400 to the present. Unlike most studies, which assume that the "rise of the West" is the story of the coming of the modern world, this history, drawing upon new scholarship on Asia, Africa, and the New World, constructs a story in which those parts of the world play major roles.

Robert B. Marks defines the modern world as one marked by industry, the nation state, interstate warfare, a large and growing gap between the wealthiest and poorest parts of the world, and an escape from "the biological old regime." He explains its origins by emphasizing contingencies (such as the conquest of the New World); the broad comparability of the most advanced regions in China, India, and Europe; the reasons why England was able to escape from common ecological constraints facing all of those regions by the 18th century; and a conjuncture of human and natural forces that solidified a gap between the industrialized and non-industrialized parts of the world.

Now in a new edition that brings the saga of the modern world to the present, the book considers how and why the United States emerged as a world power in the twentieth century and became the sole superpower by the twenty-first century. Once again arguing that the rise of the United States to global hegemon was contingent, not inevitable, Marks also points to the resurgence of Asia and the vastly changed relationship of humans to the environment that may, in the long run, overshadow any political and economic milestones of the past hundred years.

“I am delighted and excited by this book-it provides such an excellent overview of what world history is all about. The economy of the writing, the great balance the book displays in juggling an enormous agenda, and the elucidation of concepts are superb.” (Ewa K. Bacon, Lewis University)
“Remarkable in [its] presentation of coherent global narratives.” ( Journal of World History)

What listeners say about The Origins of the Modern World

The narrator you can hear the smacking of their lips which becomes annoying. The book itself does well for a non-Eurocentric narrative but downplays the achievements of Europe and the West too much. The whole narrative of the West being the worse while celebrating other cultures such as Islam for the exact same thing for conquest is hypocritical.

The book: Pretty good. Interesting idea about the origins of Western domination. Easy to read. Not too much jargon. Discusses the role of the environment in history. But the author repeats himself a lot. I kind of like that but can get annoying. He also obsesses on China at the expense of Africa & other places The narration/recording Its dry. Could use some more passion I know this is a relatively obscure book. Because of that I’m forgiving. He seems to pronounce nearly everything properly.

History as I Wished I Was Taught

Western history set in a global context. Insightful and thought provoking. This course will challenge all the stereotypes you were taught concerning the moral, economic, intellectual, religious and philosophical superiority of the west and its fated dominance of the rest of the world. It is a thought provoking examination of the forces at work in recent history with plenty of surprises for the student. Great wonder and wonderful presentation.

I listened to the audible and will now read the kindle version.

This is an interesting book. Recommended for history and sociology interests with environmental issues given consideration.

the truth of the modern world.

great book! it's a lot to take in but well worth it. a little difficult, as there is so much going on. every one should learn the truth about globalization and how it works, and its origins. it will make you angry or feel something.