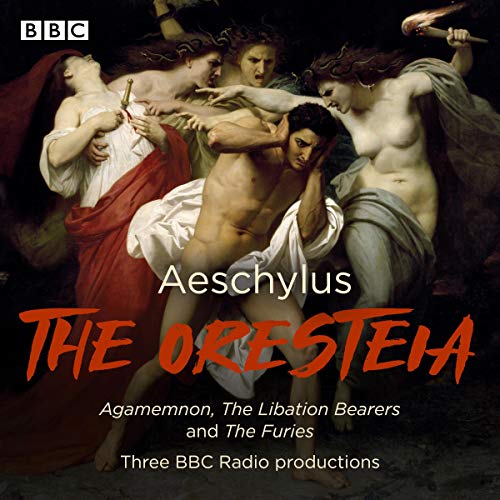 The classic trilogy about murder, revenge and justice, as heard on BBC Radio 3 – plus a bonus documentary exploring Aeschylus' seminal Greek tragedy.

A chilling tale of homecoming, violent death and bloody vengeance, The Oresteia dates back to the fifth century BC, but its themes still resonate today. At once a family saga, morality tale and courtroom drama, it recounts how two generations of the cursed House of Atreus become locked into a deadly cycle of atrocities. To break the chain, their private vendetta must become public, as questions of guilt and justification are decided in the first ever homicide trial....

The Trojan War is over, and conquering hero Agamemnon arrives home to Argos. But victory came at an appalling price – the sacrifice of his eldest daughter, Iphigenia. Now, his wife Clytemnestra is determined to take a grisly revenge …

Returning from exile, Agamemnon's son Orestes vows to avenge his father’s death by murdering his killer, his own mother Clytemnestra. But where can he find the strength to carry out such a horrific deed?

Having committed matricide, Orestes flees to Delphi. But the remorseless Furies, ancient deities of vengeance, are on his trail and baying for blood. Can the young gods Apollo and Athena save him from a terrible fate?

Adapted by three of Britain’s most imaginative writers, Simon Scardifield, Ed Hime and Rebecca Lenkiewicz, these contemporary versions of Aeschylus’ trilogy are atmospheric, fast-moving and superbly accessible. The star casts include Lesley Sharp as Clytemnestra, Hugo Speer as Agamemnon and Will Howard as Orestes.

Each of the plays is introduced by Edith Hall, Professor of Classics at Kings College London.

Also featured is an episode of In Our Time, in which Melvyn Bragg and guests discuss how The Oresteia has fired the modern imagination, inspiring artists ranging from Richard Wagner to T. S. Eliot.

What listeners say about The Oresteia

This lives up to the BBCs most deserved reputation for quality radio drama, with a thoughtful addition of the relevant episode of ‘in our time’. The only criticism is that it feels too short but I think these are only supposed to give you a flavour of the full play. I’m off to find it!

these are the most important plays I have experienced and are brilliantly done in this recording. everybody needs these 3 plays in their lives...invaluable. there is a very good discussion included also

In case you missed it in the description, this is not Aeschylus’ text. The plays are three adaptations by three different writers. Agamemnon is quite good, Libation Bearers is pretty good, Eumenides is not so good. But overall, it is worth the credit.

I could listen again and again, I felt as though I was listening to the original performance in an athenian aptheater.