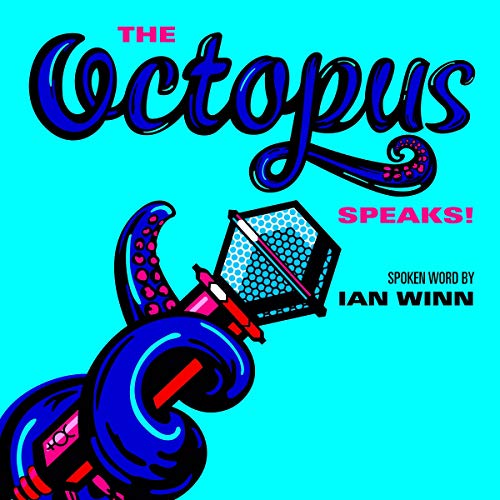 Spoken Word at its sparkling, hilarious best. Featuring excerpts from Mercury in Retrograde, a show critics describe as “cancelled due to clinical psychosis”, and The Scotsman called "Strangely gripping."

“Get on a Winn-ing streak. With his energetic performance poetry, Ian Winn is a leading star on the spoken word circuit.” (The Guardian)

‘The Octopus Speaks’ is nothing short of brilliant. The matter-of-fact nature in which the adventures and breakthroughs are delivered left me constantly painting pictures in my head of the situations, characters and surroundings.

Told with distance, but total clarity and great humour I would encourage anyone on a journey to anywhere that last longer than 90 minutes to listen in.

Winn’a Mercury is mythical mastery. His techno-pagan octopus messiah an audio delight. A must listen!

Ian Winn aka Mercury/Hermes/Loki and Lord of Misrule takes you on a roller coaster ride of mishaps, near misses, mythic manners and morality. Man as part of nature, Man as lord of Nature, deposed and brought low at any time. Man watching himself looking at Nature. Want to eat meat? Fine, but would you kill it yourself? Want to join a spiritual commune? Wear maroon and say ommmm....(but watch how the money flows...follow where it goes.)

There is a distinctive style throughout, comedy with warmth but bite, and the sixties and seventies are long gone, but their ghosts live on.

Ian's delinquent Mercury knows a lot about Saturn, and so he would. Mercury is the deal maker. Saturn is the power of the corporation.

Fast paced, almost relentlessly paced, this is a performance poet as bard.

Choose your god if you must. Worship at your peril. Every choice is a rejection, but divinity is within, and the elements rule.

Take a trip with the Octopus....

Winn’s fluid, vibrant prose cascades like a kaleidoscope of vivid sounds, images and smells, dazzling and inspiring the listener with tales of his travels, mental and otherwise--transporting you far beyond, to places you’d never yourself think of going. His unique voice and provocative wit always deliver. A true wordsmith. Hugely enjoyable. Listen. And, watch out....

Listened to this on the way to Burning Man and it was a great way to prep my psyche for the experience. Whimsical, hilarious, suprising, and a great voice performance. I got this and my boyfriend wasn't so sure when I read the description... he said he would give it a try, Well, we wound up listening to almost the entire thing on the drive down, laughing so hard we shed occasional tears.

Ian Winn has lived a life of adventure and wonder. I strongly recommend his other work as well

Wow. Incredibly fun to listen to. Full artistry of composition and performance. Listener, enjoy. The texts intersperse narrative poems from Techno Pagan Octopus Messiah with poems in the voice of Mercury, which the author uses to deliver sharp and funny social commentary. Winn's voice, sometimes accompanied by the voice of a British actress, is marvelously expressive, now sounding like an elderly Jewish American guy, now like a conniving divinity, now like Eminem. The poems are sculpted, shaped, crafted, for maximum comprehension, wit, and listening pleasure. Bravo, Merc. Give us more.

Spoken word at its finest! Ian takes you on an amazing journey that will make you ponder then laugh out loud. I sat down to listen to a couple of chapters and ended up enjoying the entire book in one sitting. Highly recommended!

LOVE this traveler’s tale on a sojourn that weaves like a dream catcher ornamented with shells and deserts, camels and oils from places requiring passports and a hunger for depths and love. You won’t be disappointed and in fact, will be delighted. Download for your next road trip or train commute and prepare to be transported. Am looking forward to more from Ian Winn...this is a stellar beginning...

These tales of Ian Winn's journeys thru Egypt, India and Burning Man is a helluva ride! Channelling the god Mercury thru much of these performance poetry pieces, he weaves deeply timely and revelatory expressions of mankind's fixations, fuckups and follies, with darkly sardonic wit and a huge heart.