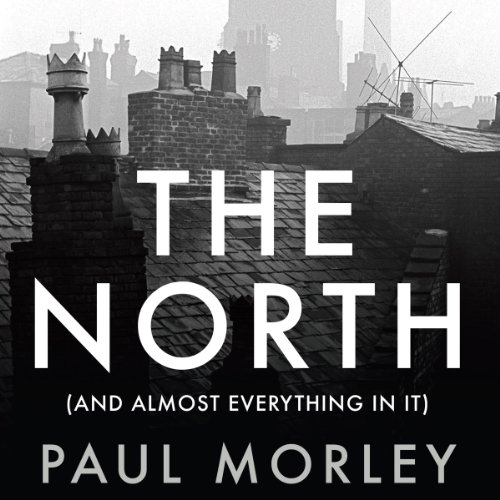 By: Paul Morley
Narrated by: Ralph Lister
Try for £0.00

Here is the north, this is where it lies, where it belongs, full of itself, high up above everything else, surrounded by everything that isn't the north, that's off the page, somewhere else...

Paul Morley grew up in Reddish, less than five miles from Manchester and even closer to Stockport. Ever since the age of seven, old enough to form an identity but too young to be aware that 'southern' was a category, Morley has always thought of himself as a northerner. What that meant, he wasn't entirely sure. It was for him, as it is for millions of others in England, an absolute, indisputable truth. But he wondered why, when as a child he was so ready to abandon his Cheshire roots and support the much more successful Lancashire cricket team, and when as an adult he found he could travel between London and Manchester in less than two hours, he continued to say he was from the North.

Forty years after walking down grey pavements on his way to school, Paul explores what it means to be northern and why those who consider themselves to be believe it so strongly. Like industrial towns dotted across great green landscapes of hills and valleys, Morley breaks up his own history with fragments of his region's own social and cultural background. Stories of his Dad spreading margarine on Weetabix stand alongside those about northern England's first fish and chip shop in Mossley, near Oldham. And out of these lyrical memories rise many disconnected voices of the north; Wordsworth's poetry, Larkin's reflections and Formby's guitar. Morley maps the entire history of northern England through its people and the places they call home - from the frozen landscapes of the Ice Age to the Norman invasion to the construction of the Blackpool tower - to show that the differences go deeper than just an accent.

Ambitiously sweeping and beautifully impressionistic, without ever losing touch with the minute details of life above the M25, The North is an extraordinary mixture of memoir and history, a unique insight into how we, as a nation, classify the unclassifiable.

What listeners say about The North

A book for those who have lost the will to live in the North and whom, need that final push from the ledge.

What was most disappointing about Paul Morley’s story?

The book appears to be a rambling and disjointed tale, which struts around like a Mancunian popstar in the declining years of their fame.

10 chapters within the first hour, all of which simply scratch at the surface of what the North really is about.

Morley seems to have simply sat with a pile of text books and simply used a cut and paste approach to his own work, adding a quote here, and comment there, to create a dry pastiche which lacks the warmth and humour of Stuart Maconie, the (in my opinion0 preeminent Northern commentator du jours.

The narrator's Middle England sounding voice, and (to coin a good strong and honest Northern term) piss poor accents and pronunciation made an already rambling book, unbearable to the ears.

A second rate approach in dealing with what could be a first rate subject, Morley's writing is grimmer than the region he sets out to celebrate.

Should have been narrated by a Northerner!

Like the author, I too was born and raised in North Reddish, Stockport , and it brought back many amazing memories from my youth .
However, the narrator, not Northern , reads the book with all of the passion of a man reading his Waitrose shopping list!
As if his mispronounced Northern towns and villages weren't annoying enough, they were nowhere near as cringe worthy as his attempts at mimicking a Mancunian accent,- that practically made my ears bleed and my heart sink!

Why, when there are so many passionate and talented Mancunians and Stopfordians out there would someone choose this wholly unsuitable narrator??!

A journey through North West England