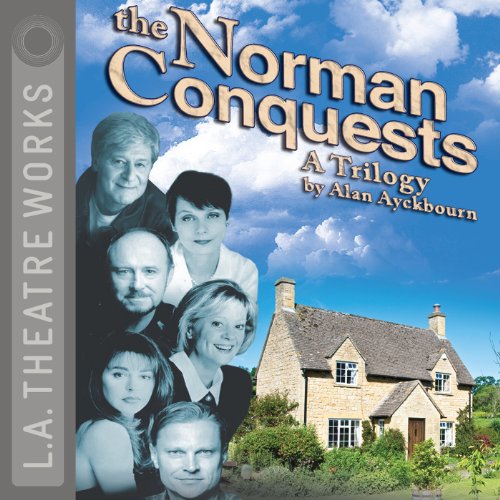 Ayckbourn’s celebrated triology The Norman Conquests - three hilarious and poignant plays depicting the same six characters in one house over one weekend, namely Norman and his romantic follies. Table Manners: England’s famous seducer of other men’s wives lays siege to his sister-in-law in the first “battle”. A middle-class family trying to have a pleasant country weekend is no match for Norman, who horrifies everyone by doing exactly as he likes. Living Together: In the second “battle” Norman gets drunk on homemade wine – and all hell breaks loose. He unleashes his merry brand of manipulative charm on the hapless guests and even his most formidable opponents go down in defeat on the drawing room rug. Round and Round the Garden: In the third “battle” the setting is Mother’s overgrown English garden, where something more troublesome than brambles lurks among the roses. Havoc ensues as this satirical masterpiece makes its way to a hilarious conclusion.

"The incomparable Martin Jarvis delivers an unforgettable performance as Norman, with Jane Leeves as lovelorn Annie, Christopher Neame as the clueless Tom, Ken Danziger as the sardonic Reg, and the entire cast delivering excellent performances in a hilarious and highly recommended audio book that will deliver the listener to the front row of the theater. " ( Publisher's Weekly)

What listeners say about The Norman Conquests

The Norman Conquests - laugh a minute

I really enjoyed listening to these. I really liked the way the full story unrolled the longer I listened. I kept thinking "Oh I know where this is going" but was constantly surprised by the twists and turns as the plot was revealed. The scene is set in one of my favourite locations - a very English houseparty with very English characters. A most enjoyable listen.

What was one of the most memorable moments of The Norman Conquests?

Buy this set in the three individual parts rather than this "complete" set (which starts with the SECOND part, not the FIRST). They may all be there (not sure) but they're out of order if they are. So amateurish!