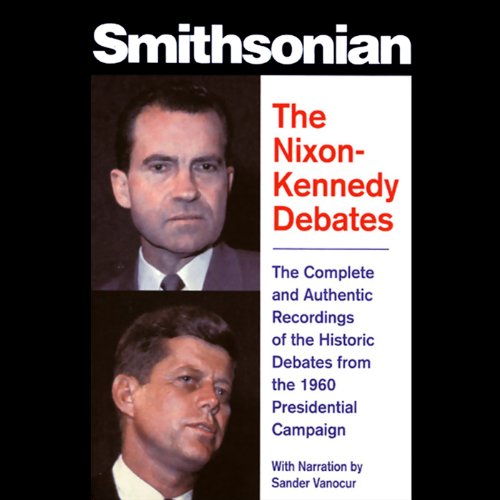 In the fall of 1960, a series of debates between candidates for President, Republican Vice President Richard M. Nixon and Democratic Senator John F. Kennedy, would forever alter the landscape of political campaigning.

The Nixon-Kennedy debates were the first presidential debates to be broadcast to a nationwide television and radio audience. Millions of Americans watched or listened to the historic confrontation.

To this day, controversy still surrounds these meetings. Did the visual aspect of television interfere with the integrity of the candidate's words? Did the medium become more important than the message?

This compilation contains the complete audio recordings of all four of the landmark debates complemented by narration by Sander Vanocur (one of the original panel of journalists during the first debate), enabling listeners to hear, word for word, history in the making and to draw his or her own conclusions about who won this face-off between two of America's most noted Presidents.

"Gripping listening....This audio is a trip to the political world of 1960: a welcome return for some listeners; a welcome first visit for others. Very highly recommended for the general listener. Required purchase for fans of history and politics." ( Library Journal)
"This complete recording of an historically important set of debates...is livelier, while at the same time more civil, than our current presidential debates. Even though the original Mutual Broadcast radio recordings are used, the audio is quite good. Vanocur provides helpful and interesting background information in his narration." ( AudioFile)

What listeners say about The Nixon-Kennedy Debates

I have never heard Kennedy this much before today. Must of been a real treat to see or hear him in person. He and Nixon are or were a real class act. Now JFK was a president I'd like to call my dad because he was a father to our nation and had the courage to stand up for his beliefs in a strong yet respectful manner.

I enjoyed listening to the 4 debates. The commentary from one of the debate's panelists added to the quality and completeness of the production.

For the most part the draw for listening to this is definitely the educational aspect. It's not a story, and you can't complain about the narrators. Heck, you can't even really complain about the audio quality. But, for as short as it is I found it to be a really cool perspective on this period of American history. Max gives this a "Read with Confidence" deal of approval.

A trip back in tiem.

Would you consider the audio edition of The Nixon-Kennedy Debates to be better than the print version?

Recordings of the actual debates.

I don't know what it would be.

I've heard all four debates previously, but I thoroughly enjoyed this program. Vanocur's narration gives the listener the proper context of the issues in the debates, particularly on the foreign policy issues. For those who want to gain a better understanding of the 1960 election and why the debates were so crucial to the outcome of the election, this will be a great help.

while you got alot of detail you might not ask for about events in the months of 1959/60, the caliber and range of debates was very interesting. really happy I heard this.