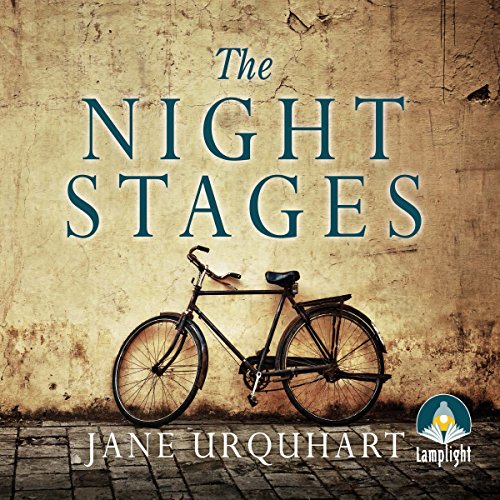 Ireland, 1950s. After a tragic accident leaves Tamara alone on the most westerly tip of Ireland, she begins an affair. At first her romance is filled with passionate secrecy, but when her lover Niall's younger brother, Kieran, disappears after a bicycle race, he slowly falls into despondency.

Distraught, Tamara decides she has no option but to leave, making her way from Ireland to New York. Slowly she interweaves her life story with Kieran's as she searches for the truth about Niall.

What listeners say about The Night Stages

If you're Irish this book will really irritate you

The narrator could have researched how Irish names (of people and places) are pronounced and what an Irish accent actually sounds like.

Who might you have cast as narrator instead of Charlotte Anne Dore?

Fiona Shaw would have done an excellent job.

If you could play editor, what scene or scenes would you have cut from The Night Stages?

The scene that inaccurately refers to the Irish language not being allowed to be taught in school in the 1950s.

So much of this book takes place in Ireland, the very least the narrator could have done was to research how words and names are pronounced, especially names! The attempt at sounding Irish was so poor that I doubt if this particular narrator would ever be able to master it.