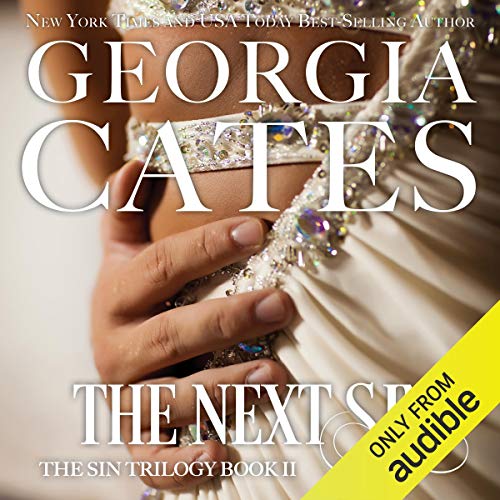 By: Georgia Cates
Narrated by: Jennifer Mack,David Thorpe
Try for £0.00

I’ve watched her from afar for weeks. And she has no idea.

Bleu MacAllister ran from me three months ago. She thought she could disappear from my life. My beloved believed I’d let her go.

What listeners say about The Next Sin

it's not my first time listening to book 2 'The Next Sin' but it never gets old! Ready to listen to book 3!

I couldn't stop listening to this! I'm loving this Trilogy, it's got the right amount of suspense, love and sex! Bleu & Sin are a great couple, they talk to each other and tell the truth no matter how the other will react. His love for her is so intense but he isn't to controlling, at least not without reason! I love that this relationship works even though he's a crime boss and she is an ex FBI agent, neither try to change the other they accept it and move on. I love Jennifer Mack, she is awesome at narrating this story and Antony Ferguson is great for all the male characters, although I don't love his female voices but it doesn't matter to the story at all!

It's been three months since Bleu ran from Sin and, for every day she's been missing him, he's been hurting too and hunting for her - now he's lurking hidden in the shadows watching Bleu, missing her and his need to hold her is growing. But he has to step into the light now and claim back what's his because his Uncle is coming for revenge on Bleu and Sin just can't and won't let that happen. Bleu is heartsick - her Dad is reaching the end of his battle with Cancer and the Cancer has sadly won and she's also full of regrets over having had to leave Sin - the only man she'll ever love. She's trying to be positive but when an old flame reappears in her life she knows that's not going to happen any time soon..... which is just as well because she gets the shock of her life after she says sorry not going to happen and goodnight to her old flame.... because lying in wait is Sin.... as sexy and handsome as ever despite the anger that's oozing from him.

They argue, toss verbal daggers at each other and tension rises but that only fuels the sexual chemistry between them and it's not long before they're confessing their undying love and kissing. Sin has a plan and a proposition for Bleu but the clock's ticking and their escape time is slipping away and so too is her Dad's life which has become critical however Bleu has no intentions of walking away. So Sin, the kind, thoughtful and loving man that he is, is left with no choice.... he'll stay and get to know Bleu's family - but there's a shocking request asked of him which will end in tears.

When the couple eventually return to Scotland (and The Fellowship) not everyone is pleased to welcome Bleu back, his Uncle is still scheming and is determined to destroy Bleu, she is consumed once again with finding out who murdered her Mother and a health scare causes some serious discussions, decisions and plans have to be made. All these topics cause angst, turmoil, grief and heartache.... but nothing like the retribution that's about to come too close when a rival gang's action leaves one Hell of a Cliffhanger ending. Book 3 here I come.

There's sex, romance, drama, tears, bloodshed and death in this one but there's also some celebrations too (no spoilers) so another entertaining and enjoyable listen. Dual POV's but once again the narration, IMO, let this book down big time because neither narrator did the opposite sex's voice well which is something I had to get passed.

Worth a credit? Oh YES, it packs a lot of events in, there's action, drama, sex and romance and the third book is calling my name so I'm off to discover who the murderer is, how Sin and Bleu are going to get out of their current dangerous and very different situations, what other trouble the Uncle is about to stir up, how is this talented Author going to wrap the story up in a HEA ending..... and I'm sure there will be much much more.

I LOVED this continuation from the first book in the series. Sinclair & Bleu now married and have a whole new set of obstacles ahead of them. The loss of Bleu’s father was emotional and impacted her immensely. The way Sinclair helps her through that pulled at my heartstrings. Bleu is one of the strongest female heroines I have ever read! She has been through so much! She is resilient and has some problem solving skills and smarts like I’ve never seen! Sinclair is a truly sexy alpha who will protect Bleu at all costs! I was stunned by another cliffhanger and cannot wait for the final book in this trilogy in One Last Sin.

This is a great series. It hits on topics that people don't talk about alot in the real world. It's more real than people think.

Definite the Next Sin

This was definite next sin. There was drama, emotions, action, and most important love. The narrators were amazing with the characters.

I just finished binge listening to the first three books of “The Sin Series”, Bleu MacAllister & Sinclair Breckenridge’s story and what a story it is! Georgia Cates is a gifted author and I loved thing about these books, from the awesome storylines & characters she created to the dynamics of the world they live in. A Scottish mafia, who knew? I adored the lead characters, Bleu is strong and determined she is a woman on a mission. Sinclair “Sin” is a strong alpha male dedicated to “The Fellowship”, he is next in line to lead. Each book in this series is amazing, the stories picks up where the other leaves off. There is never a dull moment with plenty of drama, angst, action, thrilling & suspense moments, heartfelt ones and some hot romance. Georgia Cates, thank you for this amazing story and series! All the characters, primary and secondary, are awesome and I am looking forward to their stories next. And I must say love, love, love “In to me…you see”!!

I listened to the Audible edition, Jennifer Mack and David Thorpe are fantastic narrators and voice artists. They did an awesome job portraying the characters, bringing each to life with their own voice and personality. David’s Scottish accent was amazing and Jennifer’s US southern girl accent. They captured and projected the characters emotions into their performance as well as the drama of the story. They are entertaining storytellers and a pleasure to listen to. Thank you for this awesome listen🎧

I usually lose interest in series but book 2 is a continuation of book 1 and it delivers! It ended on a cliffhanger which makes me anxious! Narration was awesome! I love David Thiorpe's accent!

great book, like it just as much as book 1. Sinclair is really a nice and sweet guy for a criminal. He really loves Blue

The problem with these books, is the heroin in much too perfect. So Bleu is 1. Beautiful 2. Great body 3. X-FBI, 4. can kick butt of a man twice her size, 5. plays the violin (even the devil goes down to Georgia...REALLY? ) 6. Is a professional photographer 7. Great cook of southern cuisine and the list goes on and on. And then of course her Flawless hunk of a man, (rich of course) is a fabulous lover and gives in to her every whim. This would be a much better book if it were more realistic and less predictable. Give us more of the “average Joe”.

You can run but you can't hide

When you love something set it free if it returns it's meant to be . This is an amazing story and it continues into one more story