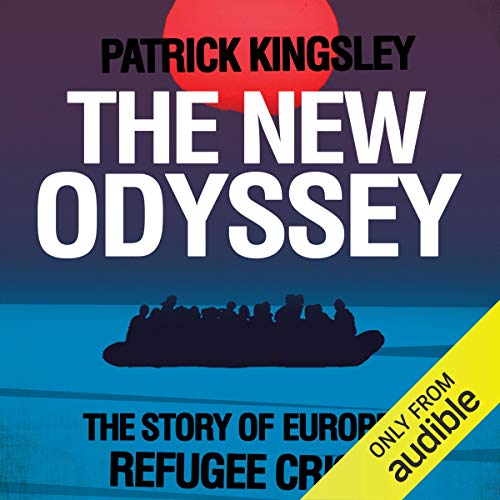 By: Patrick Kingsley
Narrated by: Thomas Judd
Try for £0.00

Europe is facing a wave of migration unmatched since the end of World War II - and no one has reported on this crisis in more depth or breadth than the Guardian's migration correspondent, Patrick Kingsley. Throughout 2015 Kingsley travelled to 17 countries along the migrant trail, meeting hundreds of refugees making epic odysseys across deserts, seas and mountains to reach the holy grail of Europe.

This is Kingsley's unparalleled account of who these voyagers are. It's about why they keep coming and how they do it. It's about the smugglers who help them on their way and the coast guards who rescue them at the other end. The volunteers who feed them, the hoteliers who house them, and the border guards trying to keep them out. And the politicians looking the other way.

The New Odyssey is a work of original, bold reporting written with a perfect mix of compassion and authority by the journalist who knows the subject better than any other.

What listeners say about The New Odyssey

The story we do not hear

Would you consider the audio edition of The New Odyssey to be better than the print version?

Yes, the narration was excellent throughout and at times I felt as though I was on the journey with the migrants.

Hashim was probably the character who most stood out to me as he was the one refugee Kingsley followed in the most detail throughout the book. Chapters on Hashim's journey from Syria to Sweden intersperse the more general accounts of parts of a migrant's journey, from the perilous boat journeys to the stress of European border crossings. I also warmed greatly to the Austrian shepherd who risked police arrest to fetch a Kurdish mother and her children from the Hungarian border. He was encouraged by stories of his own mother fleeing war as a refugee in World War II.

Which character – as performed by Thomas Judd – was your favourite?

I appreciated hearing the different stories of the migrants, how they had overcome oppression and now struggled with a journey fraught with dangers as they travelled to and through Europe. The stories of these different characters are the stories we rarely hear in the media. Judd's narration of Kingsley's recollection of conversations he had with the various migrants was superb.

After listening to this I feel shocked and sickened by the struggle and suffering the refugees have had to go through in Europe having already fled war and persecution in their own countries. I am also shocked and sickened by the general unwillingness of so many European governments to work in unity to assist these people. I also felt quite emotional when Hashim received his asylum decision from the Swedish authorities.

This book won't tell you in vast detail about the implications of hundreds of thousands of people emigrating to Europe, the potential security risks that it may pose, and the economic and cultural difficulties that could arise from it. Kingsley's book is mainly focused on the human element of the crisis. In that sense it could be argued that it is biased towards the migrants but I do feel strongly that literature of this nature has been long overdue, especially given the increase in popularity of far right political parties across the European continent. This is the story of the people who risk their lives so that they and their families can have a future away from a place where they strongly believe they have no hope. I hadn't previously appreciated the difficulties in Eritrea, a country that is hardly in the news and yet has many of its citizens fleeing to Europe. I also hadn't appreciated how many Middle Eastern countries have become hostile to Syrian refugees, and also how many refugees are fleeing from Afghanistan and Pakistan too. The mass migration of people to Europe carries with it many moral dilemmas but it is something that is happening regardless of if we agree with it or not. After this book I can see more clearly now that the real moral question is how we will act in the face of it, and I am very grateful to Kingsley for providing such a detailed human insight into the crisis. I also feel strongly that the story this book tells, is a story we all need to be aware of, not least of all because it is the story of the migrants themselves, a story that often goes untold.

I’m so glad that I read this

The first non fiction I’ve read for some time. It is well written, highly informative, and while very factual has a human face.
It could have simply been a series of statistics but is not. It leaves you feeling you’ve been with the author and his ‘subjects’. The reality of the tragic events portrayed are plain to see yet the solutions are clearly only for the few brave politicians we have.

My first review...what an insightful, informative book with personal stories to boot. Floored that Patrick Kingsley is 26 years old. Both frustrating and inspiring.