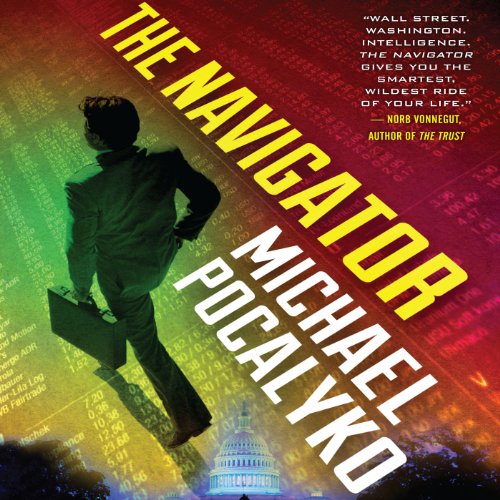 By: Michael Pocalyko
Narrated by: Christian Rummel
Try for £0.00

Thrilling and fast-paced, The Navigator weaves a web of intrigue that brings together the cutthroat worlds of Washington and Wall Street as a global communications system is poised to become the center of the world's first trillion-dollar deal. Narrator Christian Rummel raises the intensity with his powerful, smoky-voiced performance. A two-time AudioFile Earphones Award recipient, Rommel's versatility is in evidence as he transitions smoothly from character to character, enhancing each one with subtle variations in style and mannerism. As the story approaches its climax, Rummel's urgent narration makes it impossible to stop listening.

Wall Street comes to Washington in Michael Pocalyko’s The Navigator. On the darkest night of 1945, a 20-year-old B-24 navigator assists in the liberation of a German concentration camp. His haunting trauma is prologue to destiny.

Flash forward to present-day Manhattan. Warren Hunter, reigning master of the financial universe, is poised to close the world’s first trillion dollar deal. ViroSat is the Street's biggest-ever technology play - an entirely new worldwide communication system. It will catapult his investment bank and the global economy into a bright future... if the deal goes through.

Meanwhile, battered tech start-up veteran Rick Yeager has just landed his dream job at a mysterious but well-connected financial firm whose partners want a piece of the action. Warren, Julia, and Rick are caught in a web of intrigue, money, power, and dangerous secrets. Coincidences are not what they seem as the past collides with the present in a way that will change their lives forever.

A gripping story written by a consummate insider from both Washington and Wall Street, Michael Pocalyko’s The Navigator is a furiously paced parable of our troubled age.

What listeners say about The Navigator

Intriguing story with lots of twist and turns

What did you love best about The Navigator?

Pocalyko does and excellent job of developing his characters and intertwining multiple story lines. The mix of Wall Street meets DC meets spies makes for a nonstop thrill ride.

Christian Rummel brings the story to life. His ability to voice all of the characters allows your imagination to pull you right into the story. I love Dick Hill, but I will be checking out Rummel's work.

Can't wait for Pocalyko's next book.

This was a decent but formulaic thriller. The narrator was just fine. A good read but maybe wait until you find it on sale.