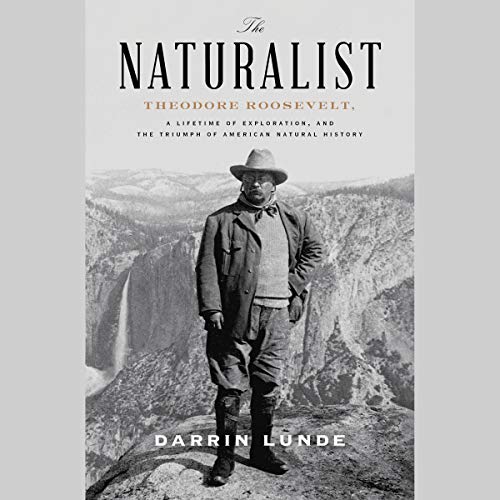 Theodore Roosevelt, A Lifetime of Exploration, and the Triumph of American Natural History
By: Darrin Lunde
Narrated by: Scott Brick
Length: 9 hrs and 56 mins
Categories: Biographies & Memoirs, Political Figures
4 out of 5 stars 4.0 (1 rating)

The surprising story of intrepid naturalist Theodore Roosevelt and how his lifelong passion for the natural world set the stage for America's wildlife conservation movement.

Perhaps no American president is more associated with nature and wildlife than Theodore Roosevelt, a prodigious hunter and adventurer and an ardent conservationist. We think of Roosevelt as an original, yet in The Naturalist, Darrin Lunde shows how from his earliest days Roosevelt actively modeled himself in the proud tradition of museum naturalists - the men who pioneered a key branch of American biology through their desire to collect animal specimens and develop a taxonomy of the natural world. The influence these men would have on Roosevelt would shape not just his personality but his career, informing his work as a politician and statesman and ultimately affecting generations of Americans' relationships to this country's wilderness.

Pulling from Roosevelt's diaries and expedition journals, Lunde constructs a brilliantly researched, singularly insightful history that reveals the roots of Roosevelt's enduring naturalist legacy through the group of little-known men whose work and lives defined his own.

One side of a many-sided man

Teddy Roosevelt was one of the greatest presidents in American History and he had a great passion for the outdoors. This is not the most complete biography, but it is an interesting facet of Roosevelt's life and motivations.

Wonderful story of an amazing American. This book is a must-read for any naturalist, no matter what their beliefs on hunting are. Roosevelt was a true 'Conservationist' and he showed that there is a need and value for the hunter in the maintenance of populations of wild animals. Roosevelt was integral in our philosophy of conservation ethics.

I found this book interesting and learned more about TR and other Naturalists of his time.

The only reason I did not give the book five stars is I felt the story stopped before it had truly ended. I understand and appreciate the story staying focused primarily on Roosevelt’s Naturalist activities, but am perplexed at why the adventure on the River of Doubt (Rio Roosevelt) was not included.

Overall, I enjoyed the narrative and the more in-depth information that was included.

First, the narrator is wonderful. It's easy to drone on a topic like this but he was able to keep my interest without going over the top.
The book itself is what you'd expect from the title. It's a comprehensive look on Teddy Roosevelt's naturalist life. I was expecting more about the west but was pleasantly surprised with the stories about Africa.
Wonderful if you're a Roosevelt fan.

Wonderful Telling of a President Naturalist

Thoroughly enjoyed the book- great insight into an era that seems long since past. My only complaint is that the book completely left out Roosevelt's trip with John Muir into Yosemite (which I was looking forward to learning about it from this naturalist perspective- even the cover of the book was taken during this trip, and not even a mention!).

Interesting to learn Roosevelt's role in shaping the museums that we now love and enjoy today. The naturalist explains Roosevelt's passion for hunting and animal study and how those two things intertwine. First book purchased thru Audible, mad at myself for not getting a subscription years ago!

I don't need my history to read like a novel, but there's a tone to this that comes off like a tour guide trying to convince his group that something isn't as boring as it seems. The thing is, the topic is anything but boring, but the text reads like stuff I wrote as an undergrad 35 years ago, which is to say competent, but not exemplary.

Also, I get tired of "collect" being used as a euphemism for "Kill". I get that if you want to collect dead examples of a species and cant wait for them to die of natural means, you have to kill them. But there should be a term that doesn't come off as a whitewash.

A great back story to alot of unknown knowledge about one of the most important men in American history.

I'm not sure that I could've enjoyed this more than I did. Bravo to all involved!

I initially bought this book more for my husband than for myself, but I'm glad I did! It was interesting and I learned a lot about Theodore Roosevelt that I didn't know prior to listening to this book. Great road trip listen!