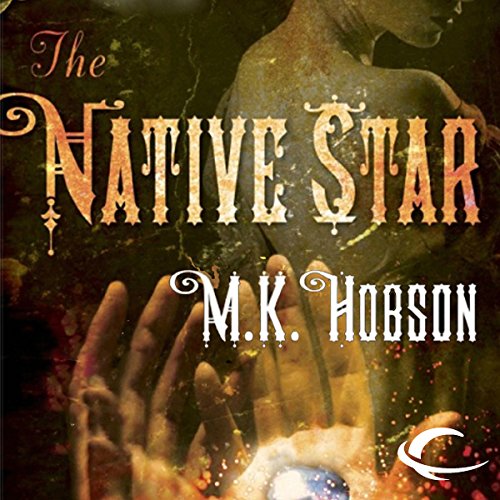 In the tradition of Jonathan Strange & Mr. Norrell, this brilliant first novel fuses history, fantasy, and romance. Prepare to be enchanted by M. K. Hobson's captivating take on the Wild, Wild West.

The year is 1876. In the small Sierra Nevada settlement of Lost Pine, the town witch, Emily Edwards, is being run out of business by an influx of mail-order patent magics. Attempting to solve her problem with a love spell, Emily only makes things worse. But before she can undo the damage, an enchanted artifact falls into her possessionand suddenly Emily must flee for her life, pursued by evil warlocks who want the object for themselves.

Dreadnought Stanton, a warlock from New York City whose personality is as pompous and abrasive as his name, has been exiled to Lost Pine for mysterious reasons. Now he finds himself involuntarily allied with Emily in a race against time - and across the United States by horse, train, and biomechanical flying machine - in quest of the great Professor Mirabilis, who alone can unlock the secret of the coveted artifact. But along the way, Emily and Stanton will be forced to contend with the most powerful and unpredictable magic of all - the magic of the human heart.

What listeners say about The Native Star

Loved this book, if you liked the 13th child you will not put this down.

Well read an written. Nice story that keeps you interested to know what will happen next. Nice historical effects and good suspense. I really liked it.

I enjoyed this mix of the wild west and magic, although I thought it ran out of steam a little by the end.

As a previous reviewer, noted, the first half of this novel was more interesting than the second half which felt a bit manipulated to keep the suspense alive. It felt like an old Saturday matinee with each cliff-hanger miraculously topping the previous one. But the novelist's world of magic is inventive and interesting, reminding me more than a bit of the Harry Potter stories. I would recommend this novel and am looking forward to reading the next in the series.
I found the narrator to be interesting and she made it easy to differentiate the characters which is their number one goal in my estimation. As with most female readers, her male characters weren't as realistic as the female characters, but they were all distinguishable from one another.

Native Star turned out to be a worthy listen. It took about a third of the book to really hook me though. I didn't like the female protagonist very much. She came thru as a brat without reason. Stanton, her male counterpart becomes interesting in the second half of the book. Because the narrator has a higher pitched voice I found some of her characters difficult to understand. That said, I am somewhat hearing impaired.

I will definitely listen to the sequel. This series has promise

I fell in love with MK Hobson's voice, razor sharp mind and wit while listening to Podcastle, a podcast she sometimes narrates or showcases short stories of her own; this would have been that rare situation where the author as narrator could have been fantastic. That said, Suehyla El-Attar did an excellent job narrating Native Star, an exceptional novel. I'm purchasing the rest of the series now. Don't miss this book.

While this technically isn't "steampunk" fiction, it is set in the Victorian era and magic sort of mixes with tech for an alternate reality - giving it a steampunk feel. I haven't read a single steampunk book that has left me satisfied. Which is why the first 1/2 of the book surprised me with how much I enjoyed it. Good pacing, interesting characters - nothing spectacular, but solid. The last half starts to drag and the last quarter... felt rushed, uneven, and somewhat thoughtless.
To add to all of that, the narrator, who had a lovely voice, needs a bit more experience. Her phrasing can be choppy and there are some mispronunciations that are annoying. If I could have given this book 2.5 stars, I would have.

Yes for someone who can handle the long almost tedious parts of a book that are deemed necessary to establish the world being developed within the story.

Would you recommend The Native Star to your friends? Why or why not?

I would recommend to some who like this sort of thing.

She did very well.

no, absolutely not too much tedious information to listen to in one sitting

I enjoyed this book very much. The characters were engaging and the plot kept me interested from the very first paragraph to the last. The action scenes were honestly exciting. I'm especially taken with the world created here and hope there's a sequel. The narrator did an excellent job finding a unique voice for each of the many characters.

So many of the writers who try to add steam-punk atmospherics to their books end up losing something in the telling of the story. The constant descriptions of mechanical contraptions really detract from the reader's ability to be absorbed by the narrative. I found that to be so with this book, which wasn't a bad read -- and pretty good at times -- but still hampered by this artifice. Things are introduced and not explained (why are they using zombies as miners, and what are they mining?), which I found annoying. Also, the idea (SPOILER) that the main character had to have her hand cut off made zero sense to me. It would have been much better if the rock gave her abilities or if it just fell out at some point. Very unsatisfactory ending. I mean the rock was THE big deal and then they just cut off her hand and that's it? seemed like the author cared more about the gizmos than the plot. I didn't hate it, but I won't buy the 2nd book.