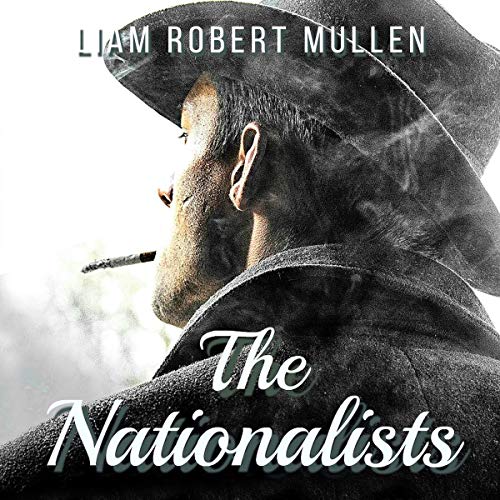 By: Liam Robert Mullen
Narrated by: Pat O'Brien
Try for £0.00

Described by one reviewer as "bloody accurate", The Nationalists is an Irish story set against the bloody backdrop of the 1916 Easter Rising, the War of Independence, and the Irish Civil War.

From the author of The Scribe, The Soaring Spirit, Kolbe, and Land of Our Father comes a sweeping new novel that spans the turbulent years in Irish history - 1916 to 1923.

The 1916 Easter Rising wasn't just a military rising, but a cultural revolution too. The Nationalists tells the story of a doomed love affair between a revolutionary journalist and a headstrong Kerry-born Cumann na mBan girl. The story also explores how the Catholic Church viewed the events of the day. Interweaving both factual and fictional characters, the story follows an eccentric array of characters.

The Nationalists is the first book of a planned trilogy. A powerful tale of rebellion, love, redemption, and loss.

What listeners say about The Nationalists

Unfortunately I wasn’t able to finish the story. Just didn’t really flow very well for me and felt more like a documentary at times than a story and the narration didn’t flow very well with little distinction between characters.
This is my honest opinion on a free review copy.

You will feel the the emotion of the Irish people at the this time in history,anger, fear and oh yes hope.
The historical facts are good and the fiction is about individuals lives. Pat O'Brien's narration is good and made the book very listenable.

I really tried my best to like this book and some parts I did. However, if you don’t have knowledge of the Irish rebellion and civil war, you will be confused. The author skips from one character’s point of view to another without warning. It creates a sense of disconnect and makes the story feel all chopped up.

As for the narrator - good lord. I’ve never heard someone speak in a monotone Irish-ish accent SO BADLY that you can only stand it for so long. His voice sounds forced and NEVER changes. It’s just awful.

The Nationalists: Irish, Book 1.. Probably the best book I have read/listened to this year.
This book expresses the emotion of the time,anger, fear and hopes of the Irish people, it is all of these weaving history and a beautiful tale into a tale well told...
The historical facts are solid and the fiction is about individuals lives.
Pat O'Brien's narration is excellent and makes the book very listenable, though it is a complex tale with many details and concentration is required.
A must read for lovers of historical fiction.
I was given this free review copy audiobook at my request and have voluntarily left this review.

one of the best history fiction I have ever listened to .
you have a lot of details; a lot of characters.....
I love the story....
you need to be very very concentrated to take it in..... it's not a book that I could have listened in the car because I needed to be very concentrated... I needed to be at home in silence doing my chores but without listening outside it's very very very special and unique kind of story I learned a lot about history and overall it was a fantastic fantastic listen

A lot of Irish history here...

A great cast of characters real and created by the author. It paints a very grim but realistic picture of this chapter in Irish history and their determination to throw off 800 years of brutal British subjugation. The struggle against the British was very real and well documented by Mullen as was the Civil War that followed. It's graphic, tragically raw, yet so very poignant in places. What happens to the two brothers is utterly heart wrenching.

The narrative didn't always flow seamlessly and I found myself re-listening in several places while also actively checking things out on Google -- wanting further information on some of the key historical players.

O'Brien was good although I sometimes had trouble distinguishing which person was speaking unless identified in the narrative. I liked it and would be interested to see where the author intends to take things, as this is only Book 1.