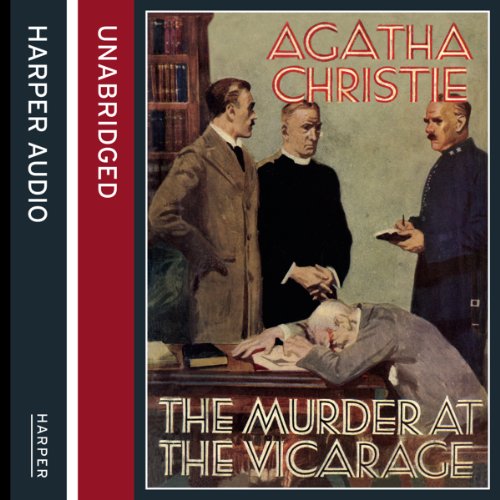 The Murder at the Vicarage

'Anyone who murdered Colonel Protheroe,' declared the parson, brandishing a carving knife above a joint of roast beef, ‘would be doing the world at large a service!'It was a careless remark for a man of the cloth. And one which was to come back and haunt the clergyman just a few hours later. From seven potential murderers, Miss Marple must seek out the suspect who has both motive and opportunity.

"The acknowledged queen of detective fiction." ( Observer)
"When she really hits her stride, as she does here, she is hard to surpass." ( Saturday Review of Literature)

What listeners say about The Murder at the Vicarage

Where does The Murder at the Vicarage rank among all the audiobooks you’ve listened to so far?

I am working my way through the Agatha Christie titles on Audible. Richard E Grant's performance is superb. Great pace and characterisation. A real period piece of a performance. Top of my list of audiobooks so far.

The vicar. Not nearly as naive as you might first think.

As ever, where Miss Marple explains 'who did it'.

Would you consider the audio edition of The Murder at the Vicarage to be better than the print version?

The narrators skill brings the characters to life

What does Richard E. Grant bring to the story that you wouldn’t experience if you had only read the book?

A fantastic story, each character sounds so different, Richard E. Grant shares with us his amazing gift of story telling.

Where does The Murder at the Vicarage rank among all the audiobooks you’ve listened to so far?

This is one of the best audio books if you are a Christie fan. There are numerous versions all of which I have listened to with terrific casts but Richard Grant's narration is superb! His voice makes for the perfect "Vicar" - and the nuances of the other characters are portrayed superbly.

The Vicar! He is so perceptive, of others and himself!

Have you listened to any of Richard E. Grant’s other performances? How does this one compare?

No I haven't but I am going to search for some more definitely.

I am not sure "Christie" comes into the category of laugh or cry but she does always have some underlying humour floating about in her characters!

Yet another book I can listen to over and over again with great pleasure. A "keeper"!

Fabulous as usual from Mrs Christie

Love this story, a great Miss Marple book. very easy to listen to and comforting.

Richard E grant totally not suited
To this book sounds pompous and
Voices unconvincing ,returned it

A very enjoyable story and a solid introduction to the wonderful Miss Marple and St. Mary Mead village. Narration is good and a convincing range of voices. A great way to while away a cold and foggy day.

This was such a lovely listen Richard E Grant bring the charters to life beautifully. I have already downloaded another Marple with him reading it!

Richard. E.Grant is a perfect narrator. I have listened to this often and it never loses its appeal. Great story and beautifully read.

I loved this story - Agatha Christie at her best. The characters were what made this story - I forgot how genuinely laugh out loud funny her writing is, and this story is a classic of village life with such brilliant characters and biting observational wit.

The voice acting was pretty good - he didn’t do a good job of women’s voices, so the old ladies sounded more like gruff old men, but he did at least differentiate between all the different voices and that was the important thing.