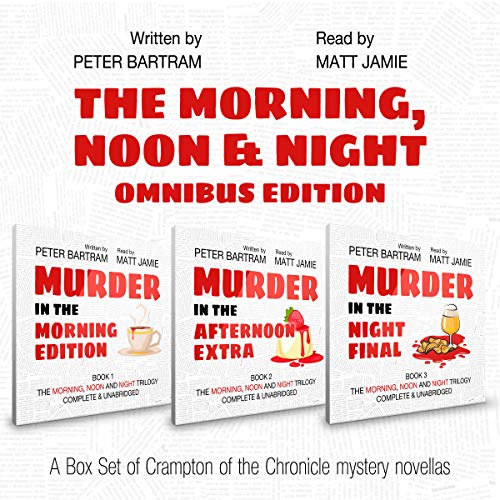 Murder in the Morning Edition; Murder in the Afternoon Extra; Murder in the Night Final
By: Peter Bartram
Narrated by: Matt Jamie
Length: 8 hrs and 22 mins
Categories: Literature & Fiction, Action & Adventure
4.3 out of 5 stars 4.3 (3 ratings)

Welcome to Brighton, England - where they do like to murder beside the seaside....

It's August 1963 - the "silly season" for newspapers when there's little hard news. Crime reporter Colin Crampton is taking life easy at the beach with girlfriend Shirley Goldsmith. But when Shirley spots a swarthy man wearing gloves on the hottest day of the year, Colin scents a big story.

Suspicion turns to certainty when Colin witnesses an audacious robbery. But nothing about the robber or the victim is quite what it seems. And as Colin and Shirley investigate further, they realise the story is bigger - and more dangerous - than anything they've taken on before.

This omnibus edition of the Morning, Noon, and Night trilogy brings all three audiobooks - Murder in the Morning Edition, Murder in the Afternoon Extra, and Murder in the Night Final - together in one convenient volume. The adventure takes you on a roller-coaster mystery from Britain to America and back again. The thrills are matched by the laughs all the way as Colin and Shirley tangle with a motorcycle rocker with bad teeth, a dyslexic tattooist, and a clumsy assassin who kills the wrong people.

Join in the fun as Colin and Shirley track down the bad guys.

"A highly entertaining, involving mystery, narrated in a charming voice, with winning characters. Highly recommended." (In Search of the Classic Mystery Novel)

"A fun read with humour throughout..." (Crime Thriller Hound)

"An excellent novel, full of twists and turns, plenty of action scenes, crackling dialogue - and a great sense of fun." (Fully Booked 2016)

Wow!This was a terrific set of books!The storyline was engaging right up til the end! Matt Jamie was a fine narrator.I was given this book by the narrator,author or publisher free for an honest review.

Couldn't stop listening. Great characters, gripping storyline, snappy dialog, wonderful British humor dry as a martini. It's got it all.

A humerous account of the consequences of people watching

What happens when a newspaper reporter is sent to find a printable story, headline worthy? An unforeseen adventure, that's what. While following a man wearing leather gloves, in 80 degree weather, a death and a disappearance happens. Of course a headline story is written about the event and the ensuing adventure takes him to the U.S.A. and back to England where everything started. The reader Matt Jamie adds to the depth of the tale and is extremely talented. Three well-written books in this audio version contains the entire story, not leaving the listener hanging until the next one is published. Would recommend this to anyone who love British humor and mysteries.

So happy I got this box set

I listened to this trilogy in one day because I was captivated by each story's plot ( filled with intrigue), character development ( replete with witty banter), the ingenuity of the author in connecting all 3 stories, and of course, the narrator who brought this work to life.