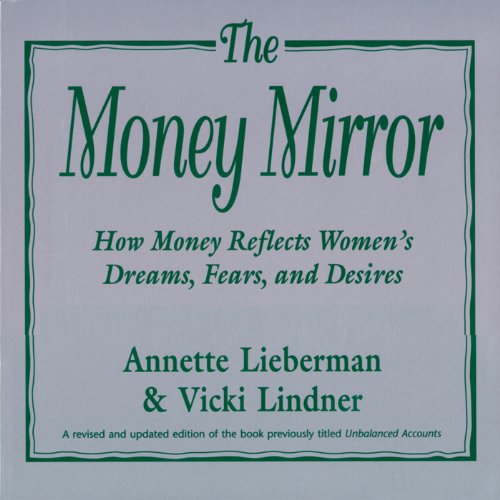 The Money Mirror, by Annette Lieberman and Vicki Linder, is an attempt to reveal to women of the middle class the way in which they perceive and relate to their money. Bernadette Dunne brings an instructive tone with her narration, which adds an authoritative feek to the audiobook.

By getting you to better understand the relationship you have with your money The Money Mirror seeks to help you, as a woman, gain control of your wealth and wellbeing. You do not have to fall victim to the monetary failures of our peers or shoulder the irrational fear of ending up as a bag lady. So grab some power and understanding with this highly valuable audiobook.

The Money Mirror shows how women's attitudes towards money reflect their feelings about themselves. Through better understanding the ways they relate to money, women can develop positive emotional attitudes and gain control of economic and personal issues. "Lieberman and Lindner document how intelligent women are still very often prey to . . . a vicious cycle of fear and confusion that prevents us from effectively earning, negotiating, investing, and managing our incomes. This lively, anecdotal book explores women's historical relationship to money, the common symptoms,…. and the antidotes." —(Ms. Magazine) . . .[offers] a wealth of down-to-earth tips on how to develop money awareness on the road to leading healthier, happier financial lives." (The Bookwatch)
©1996, 1997, 2012 Annette Lieberman and Vicki Lindner (P)2013 Audible, Inc.

What listeners say about The Money Mirror

This is one of those books (and there are very few) that I will have to read over and over so that it sinks deep. I love it. I just wish there was more to it. It's a great intro to the topic but left me wanting more, after the diagnosis, now what? What do I do? I recognize everything about myself in what you have written..... What now? Please do a follow up with step by step tips.

I saw myself in many of the characters

Would you consider the audio edition of The Money Mirror to be better than the print version?

I only have the audio edition and I'm very satisfied with it.

This book talks very clearly about the various money stories women have been taught to believe. They simply aren't true. As I listened to the examples of how those money myths have tripped up women who are savvy in every other way, I saw myself and understood why I made the mistakes I made.

What does Bernadette Dunne bring to the story that you wouldn’t experience if you just read the book?

I love being read to, and Bernadette did a good job capturing both the factual and the humorous.

I had an extreme realization of the BS I've been led to believe about women and money. I laughed, and I'm still having some ah-ha moments.

I gave the story four stars instead of five because the book was written in the 90s and some of the information was a bit dated. In fact, I hesitated buying the book at first because of that. However, the subject of women and money plus the title were intriguing enough that after thinking about it for a few days I decided to get it. Women have made a LOT of headway in the business world in the last two decades and are doing a great job managing their wealth on their own terms, meeting their needs and doing great things to serve others. I would not hesitate to recommend this book to my friends because the money mirror concept is valid, and I found the stories quite valuable.