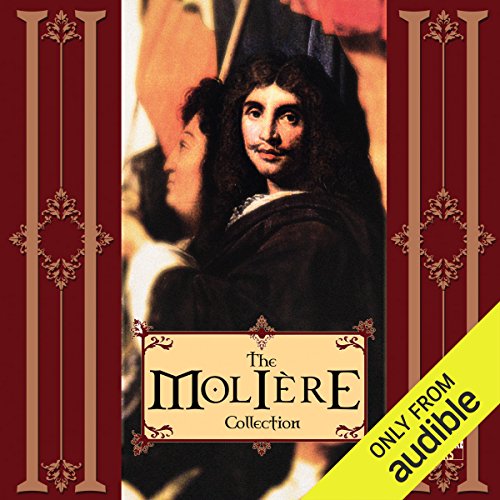 The Bungler: In 17th-century Sicily, a clever valet named Mascarille tries to help his boss Lélie win the girl of his dreams… only to find that Lélie is a monumental dunce who ruins every one of his intricate schemes. Performed by Richard Easton, et al.

The School for Husbands: Sganarelle, a tyrannical old buffoon of a husband-to-be, seeks to isolate his young ward, while unwittingly carrying her messages of devotion to her lover. Performed by: Brian Bedford, Emily Bergl, et al.

The School for Wives: In this biting comedy of errors, the hapless Arnolphe is undone by his own double dealing and double standards. This play is considered by many to be Molière’s masterpiece, and Wilbur’s subtle verse translation illuminates the great master of comedy at his wittiest. Performed by: William Brown, et al.

Tartuffe: Initially banned in by King Louis XIV, Molière’s most famous satire exposes hypocrisy in the Catholic Church. A pious fraud manipulates the patriarch of a wealthy family into giving up his fortune, and it’s up to his family to expose the truth before they end up in the poor house. Performed by: Brian Bedford, Martin Jarvis, et al.

The Misanthrope: Razor-sharp wit inflames a competitive game of survival in the salons of 17th century France. In this world of "finest appearances", one man’s blunt honesty shatters his society’s delicate web of manners in what is often considered to be Molière’s Hamlet. Performed by: Harry Althaus, et al.

What listeners say about The Molière Collection

Much like the plays themselves, the performances are quite varied - I found Tartuffe and The Misanthrope really funny and interesting, whereas the others were so-so, and the performance of The School for Wives felt a bit dated. The interviews with historians and actors in between were fantastic and really interesting. Well worth it for Tartuffe and Misanthrope, but be prepared for some inconsistency (though the production values and quality of performance was still excellent throughout)

Classic. Easton is a god

The man is so underrated. Godlike delivery enhances Moliere. Brings back to life. Opening lines of Brian Bedford are funny too.

A great collection of Moliere plays with an excellent translation, wonderful performances and some very interesting interviews in between the repertoire.

These plays were mildly amusing, but far from great. All these plays were preformed from translations to English rhymes (translating verse is very difficult), and the rhymes often seemed both predicable and forced and took me out of the flow. Some of the plays were so blandly performed that much of the humor was lost. The School for Wives and Tartuffe were the best of these six, primarily because they were the most broadly played. I found the repeating loops of barnyard or crowd background sounds completely unnecessary and distracting. In this kind of broad comedy facial expressions and stage work play an important part which is lost in audible format. This kind of bawdy humor can be quite fun if you have a women in one hand and a drink in another, but while driving they were not the thing.