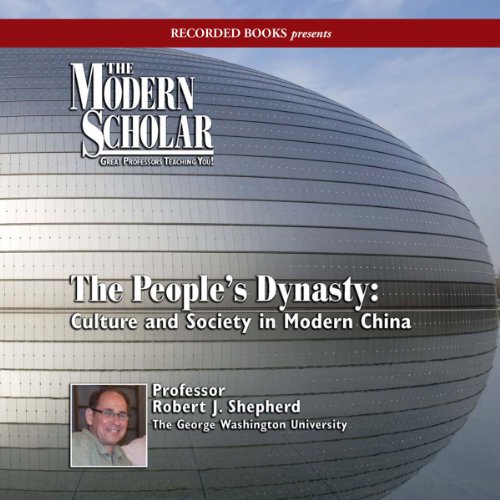 The Modern Scholar: The People's Dynasty

The state-directed opening of the Chinese economy in 1979 led to a number of radical transformations within Chinese society, but Western understanding of these changes is often limited by erroneous assumptions. Offering a clear picture of the vast economic and social forces of modern-day China, Professor Robert J. Shepherd addresses U.S. investment in China, China's startling economic growth, state vs. society issues in the vast republic, and the effect of social and cultural change on the Chinese people.

What listeners say about The Modern Scholar: The People's Dynasty

Very interesting book. Shepherd takes in an amazing range of different factors - not just politics or history, though these are dealt with as well - and deals with most issues in an intelligent and concise manner.

China is a fascinating subject, and very topical at the moment, so I recommend this to anyone keen to find out more about China, its peoples, politics and culture - past and present.

I live in Shanghai and consider this account of China to be well informed and very well narrated,

This is trully a lecture. The reader isn't a professional speaker, he sounds like a teacher. That said, once you realize that this is a lecture, it's pretty interesting.

Compared to most of the popular books on China that focus merely on it becoming a world power, or focus merely on it's economic or political interest, this one focuses on getting to know China from many different angles. I think that the professor really tries to present the information in a unbiased way. Also, after many of the depressing books that I have read about China, this one is for sure more uplifting because it's not focused on the bad but an overall view so you understand China in many different aspects.

This is an excellent modern scholar audiobook because it successfully tries to do something unusual: explain to a Western audience why many mainland Chinese are content with the continued rule of the Chinese Communist Party, and do not necessarily see their continued authoritarian rule as a bad thing. It emphasizes the practical needs and desires of most of the Chinese population, carefully explaining their perspective to a western audience. From the western perspective, this is crucial to explaining the elephant in the room when talking about China: why, two decades after Tianamen, the Chinese people (and especially their youth) do not appear to be much interested in democracy or political rights. Shepherd serves as a rare example of a strong effort to grapple with this question.

Nor does Shepherd avoid criticism. He highlights many of the social divisions and inequities that are a product of modern China (legal distinctions of citizens based on geography, growing economic disparity, practical problems caused by a lack of intellectual property rights, the CCP's powerlessness to prevent many negative phenomenon). These provide insight into the practical concerns that animate the CCP and policy types within China itself.

Shepherd's lecture style is a bit more laid back than, for instance, the indomitable Drout, but the audiobook is still very well put together overall.

This is a very "sociological" course that is too academic for my tastes. Not enough on the ground discussion about what China is like and too much looking at stuff thru a sociological view. The sections on tourism and entertainment were down right annoying.

Would you ever listen to anything by Robert J. Shepherd again?

The speaking was clear, but a little too relaxed.

A few interesting things were covered.

If you know nothing about China

What could Robert J. Shepherd have done to make this a more enjoyable book for you?

go more in detail of the history of the country

Do you think The Modern Scholar: The People's Dynasty needs a follow-up book? Why or why not?

I recommend this series of lectures because it presents an interesting and sympathetic view of Chinese society and government today. Some of his conclusions are speculations that don't ring true for me, e.g., that Chinese watch our TV shows because it confirms their sterotype of America and that Thailanders, a mostly Muslim population, watch Baywatch for the same reason (not because of the nearly-naked women). His arguments for not-too-quickly condemning China's political system are interesting and convincing, but he seems to try too hard to justify the system at times, e.g., in connection with China's censorship of internet, first by saying that the U.S. govt. has acknowledged that it can't control the internet (implying that China can't either), but then by asking why we would think that CNN (a more objective reporting of news and blocked in China) was important for people to be able to watch anyway. He has a halting speaking style, often with 4 to 8 second pauses between sentences, which I got used to. To reiterate, I do recommend these lectures, because he presents a more interesting and personal view of Chinese society than we usually see in reporting about China.