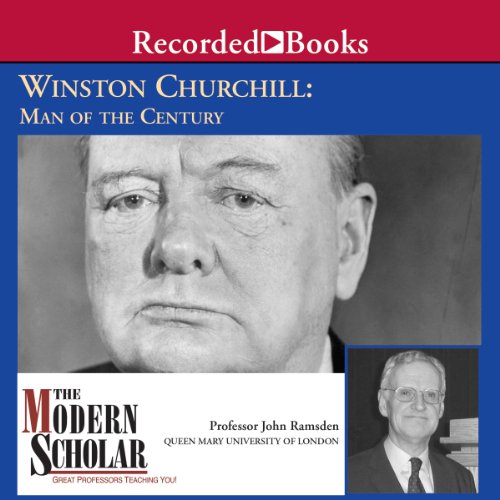 Churchill was an improbable hero for what was to be called "the century of the common man", not only because he was personally so very uncommon, but because he was from an elite British family and was never closely in touch with "ordinary people" in Britain, let alone the rest of the world.

Yet to pigeonhole Churchill that way is misleading. Winston Churchill was seen even in his own lifetime as a historic figure, one of the great men of world history, commemorated all across the world (but especially among the English-speaking peoples) in statues, memorials, streets, and schools named after him, and in a plethora of stamps, medals, plates, and other such memorabilia.

This course of lectures explores Churchill's extraordinary life and his remarkable range of skills and achievements in a 60-year-long public life. It seeks to answer the question, "What was it that was great in Winston Churchill?"

Winnie with a Teensie Grain of Salt

I'm so glad Audible offers the Modern Scholar series - and sometimes puts them on sale! "Winston Churchill" is a very solid example of their excellence: John Ramsden is a terrific lecturer, the material is comprehensive and well-researched; and the listener/student comes away with an impressive amount of information (either new or refreshed from earlier schooling or reading).

It is pretty obvious that our good Professor is a fan of Churchill's and, in this series of lectures, is something of an apologist for any flaws the man may have had. He certainly makes reference to the controversies surrounding Churchill and to his self-promoting and self-serving tendencies, but Ramsden basically follows the oft-accepted view of Churchill as one of the greatest men (if not THE greatest man) of the 20th century. I believe there are historians out there who might be a bit harder on Churchill's legacy.

Still, this is a very good overview of the life and times of an extraordinarily powerful politician, a persuasive speaker and writer, and a bigger-than-life personality. I think anyone interested in 20th century history will enjoy the ride.

Professor Ramsden covers the life of Winston Churchill better than most Churchill courses I have listened. Overall excellent program...