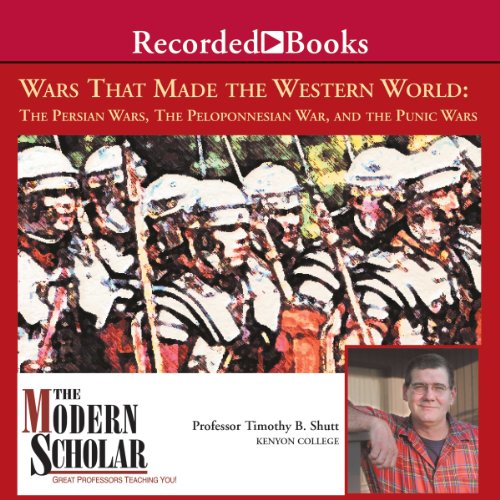 This course addresses three wars fought in antiquity, each of which had - even 2,000 years and more later - a decisive effect in shaping our communal sense of who we are, not only in Europe, but throughout the European cultural diaspora, in the Americas, in Oceania, and to some degree, at least, in Asia and Africa as well - wherever, in short, Western values hold.

The three wars to be investigated here are (1) the Persian Wars, between a coalition of Greek city-states or "poleis", most notably Athens and Sparta, and the Achaemenid Persian empire, the central and decisive portion of which took place between 490 and 479 B.C.E.; (2) the later Peloponnesian War between Athens and her allies and Sparta and hers, 431-404 B.C.E.; and finally (3) the three Punic Wars between Rome and Carthage, which stretched, on and off, for well more than a century, from 264 to 146 B.C.E.

This is a series of conferences covering 3 wars which defined the Greco-Roman world: the Persian War, the Peleponesian War and the 3 Punic wars.

The lectures are given in a lively and humourous tone by a professor which seems to know and love the topic matter. These ancient events are brought to life as if one was there as an "embedded" journalist.

The weakest parts of this audiobook are: 1) the first 10-15 minutes where we go through a slightly pedantic and PC preamble (but do continue, the rest is excellent) and 2) when the scholar tries to justify the title of "Wars That Made the Western World" to describe 3 wars that occured at least 200 years before the bith of Jesus Christ. These might have been imprortant wars, but unfortunately, there have been many other wars in the 2000 years since then.

Still, all in all, a stellar performance, about a topic most people have barely heard about.

Prof Shutt transports us to a time when civilisation hangs in the balance, and makes a persuasive case that the modern world would be vastly different were it not for the way these wars turned out. This was the first Modern Scholar lecture series I listened to and I agree entirely with the other reviewer that Prof Shutt brings his subject to life, transmitting, by turn, the genius, audacity, surprise and wonder of the ancient world's characters and the parts they played in these three conflicts. I can only encourage you to listen too. I have a professional interest in warfare and a passing interest in the classical world, but this series of lectures has kindled a passion for learning more.

Extremely intresting lectures, set out in easy to listen and review format. Professor Shutt brings the information across vividly, there's no droning on in these lectures. If you're interested in this subject these are a must! I just wish we'd studied these subjects at school.

Brilliant - a fantastic way to spend your compute

Thanks to Prof Shutt I am now addicted to audio history lectures. He makes an utterly riveting companion on the commute to work. He seems to have a natural ability for this and makes everything fascinating. His voice is easy on the ear and he delivers a good level of scholarship while retaining the excitement of a real story teller. Any folks out their studying for relevant history exams should really pick this up.

I'm now regalling my husband with details about the military strategy of hoplite battles. What has the world come to?

Those Are Names to Remember...

The names Professor Shutt has in mind are Thermopylae, Salamis, Plataea and all the other places where the Greeks turned back Persia. Places where primarily Spartan and Athenian forces, fighting against overwhelming odds, ensured that political liberty, the rule of law and free intellectual inquiry were given a chance to flourish and ultimately shape the world in which we live.

This is the best kind of military history, covering organization, commanders, tactics and battles while never losing sight of the cultures that were squaring off or the issues that were at stake. Indeed, Shutt presents those organizations, commanders and tactics as inevitable outcomes of the cultures involved. And he makes it clear that the issues were just as inevitably the result of the differences between those cultures.

Best of all, in presenting the wars that shaped the Western World—the very theme of these lectures must drive the politically correct mad—he never cringes or flinches, as if he were going through someone's dirty laundry basket or cleaning out their refrigerator. Rather, he admires the Greeks and Romans who fought for their way of life and thus shaped and informed our own culture, no matter how hard our leading educational institutions are trying to jettison what those long-dead Greeks and Romans won. As Professor Shutt makes plain in his concluding lecture, the Greco-Roman synthesis forged in these wars was a far more durable, flexible and creative entity than either Greece or Rome could have been on its own.

This is not to say that it’s all glory and cultural self-congratulation. That attitude can lead, as Shutt freely admits, to cultural blindness and for that reason has been, and should be, jettisoned “to a point”. Then he adds, “but only to a point”. Because he understands that the culture that ceases to believe in itself—and ceases to believe itself worth fighting for—is a culture in trouble. As an alternative he offers Leonidas, Themistocles and Scipio Africanus, names which countless generations have used to define what the West is and what the West means, as “touchstones”, as sources of inspiration, for us. Not a bad notion.

There are other refreshing differences between Professor Shutt’s approach and my own school days. In college the Peloponnesian War was taught in terms of Viet Nam—pointless, wasteful, unnecessary. Shutt offers a more astute, illuminating—and less predictable—analyses: perhaps the war was the inevitable conflict between the two sides of the Western character, discipline (Sparta) and imagination (Athens). Athenian overreach had certainly sparked the conflict and Shutt puts this too in the context of its time: the Greek concept of hubris. But, he asks, what of Athens had won? What of it was Athens and not Rome who made the Mediterranean basin its empire? How would that have shaped the Western World? It is a far more fruitful exploration than I—or, I daresay, most undergraduates—have experienced.

Yes, he sometimes says “Athens” when he means “Sparta”, “Rome” when he means “Carthage”. So did your professor when he or she was on a roll at the podium. You loved it then and you’ll love it now; Professor Shutt’s enthusiasm for outlandish personalities (especially Alcibiades) and mind-boggling events (particularly Cannae and Rome’s reaction to that defeat) is infectious. Just pay attention and the little verbal jumbles won’t matter.

a good overview of 3 ancient wars

Even if you think you know quite a bit about the Greek/Persian wars, the Peloponnesian war and the wars between Rome & Carthage, Prof Shutt provides a lecture with interesting surprises and interpretations of what happened a couple of thousand years ago, how it has been remembered (rightly or wrongly) and how it is relevant to the world of today (surprisingly so).

Wars that made the Western world

Timothy Shutt is not only a great scholar, but a great reader. If you are interested at all in ancient Greek, Persian and Roman history through the yes of the wars that were fought and the characters who fought them and those who recorded them, it's a must read.

This is one of my favorite periods of history, and this audio book was excellent. The pacing was good, the delivery was good, and the material was very interesting. I highly recommend it.

The wars that nade the Western World

Proff. Shutt made this era come alive. His lectures were clear, presise and at times, humourous. My previous techers had skipped over these wars, but Timothy Shutt brings home the importance of them to our world today.

Timothy Shutt tells a good story in an expressive manner.

This was an awesome listen, but it’s about the divine comedy. I enjoy mr schutts voice and cadence.

OK, not great, but OK

Medium. The Great Courses presentation of the Peloponnesian War by Kenneth Harl is far more thorough and accurate.

The connections drawn between the 3 wars

More detail on the sources as well as the inaccuracies and biases of the sources (e.g.., Thucydides bias as an Athenian)