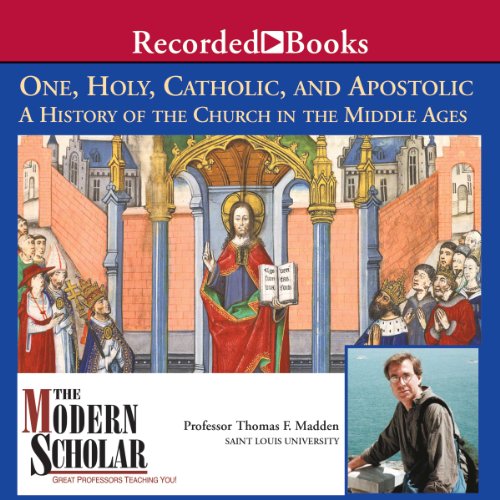 Renowned professor Thomas F. Madden turns his scholarly eye on the intrigue and politics swirling about the Medieval Church. Professor Madden explores the compelling events that shaped the culture and forever altered history, from the Monophysite Controversy to reform movements to the Inquisition, Black Death, and Great Schism.

This is a history populated with larger-than-life characters and notorious personages such as Charlemagne, Pope Innocent III, and the Knights Templar. Richly detailed and infused with dramatic intensity, Professor Madden's captivating lectures provide a better understanding not only of the Medieval Church, but of the modern world that followed.

Would you listen to The Modern Scholar again? Why?

Loved it! A great listen.

If you like the middle ages and/or the Catholic Church, you will love this audio book. The delivery can be a little dry at times, and you may need high-quality ear buds to ensure a non-muffled sound, but overall, I thoroughly enjoyed it. Thanks Mr. Madden!

A good way to fill in your knowledge

This professor does not narrate something he wrote, he just wings it, apparently with bullet points in front of him. So it's fresh and natural; he speaks in a conversational manner. That's good, but if you want lively and engaging you've come to the wrong place. That's not his personality. He knows his history and lays out the material sensibly. I'm running while I listen and can't take in a lot of information quickly, so his slow talking is a plus for me. But it may not be for you.

If you could sum up The Modern Scholar in three words, what would they be?

What other book might you compare The Modern Scholar to and why?

I have not read any book that offered such a comprehensive history of the Church in the Middle Ages.

Who would you have cast as narrator instead of the narrator?

Someone who can read clearly without it sounding like a lecture without any notes. Of course, to be fair, it is a "lecture," but I could do without all of the "uh" and other such pauses. On the positive side, and the reason for two stars (vs. none), his pronunciation was flawless. In fact, I am going to upgrade him to a three for that reason alone (since it's so rare)

I suppose I did have an extreme reaction to the book and it would be closer to "cry" than to "laugh." In the aftermath of the Second Vatican Council in the late 1960's, when so many Catholics were questioning all of the radical changes to the liturgy, we were told that the changes actually restored our religion to that of its early years. This is obviously hogwash, as the author clearly shows. The Church of 10th century was in most fundamental respects the same as the pre-Vatican II church of the 1950's. The current Catholic Church, by comparison, does not even seem "Catholic" (or holy, or apostolic). That was a shocker to me.