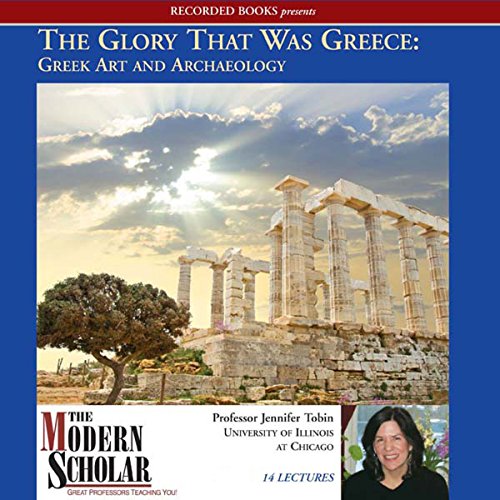 No ancient society has exerted greater influence on the development of Western culture than the ancient Greeks. Over 2000 years ago these people gave birth to the institution of democracy, to scientific investigation and philosophical dialogue, to poetry, both epic and personal, to historical narrative, and to comic and tragic theater. Their intensely creative spark also manifested itself in the arts: in architecture with the creation of temples for the gods, theaters for assembly and entertainment, and tombs for the dead, in sculpture that depicted the divine ideal and human frailty, and painting that illustrated the simple patterns of daily life, the poignancy of death, and the fickleness of the gods.
©2009 Jennifer Tobin (P)2009 Recorded Books
Show More Show Less

You feel as though you're there

I am blind, so I can't Google the artefacts under discussion in order to view them. But I got a lot out of this course. The lecturer describes the salient features of the buildings, paintings and sculptures well, so I was able to picture them in my mind's eye. She gives an overview of the historical background which influenced the direction that the art took. The change in emphasis from the community to the individual, and the changes in the way humans were portrayed, was interesting. I've already downloaded the companion lectures on Roman art and archaeology.

Very organized, cohesive, and informative. It really gave a detailed yet broad understanding of the complicated wars and leadership during this time.