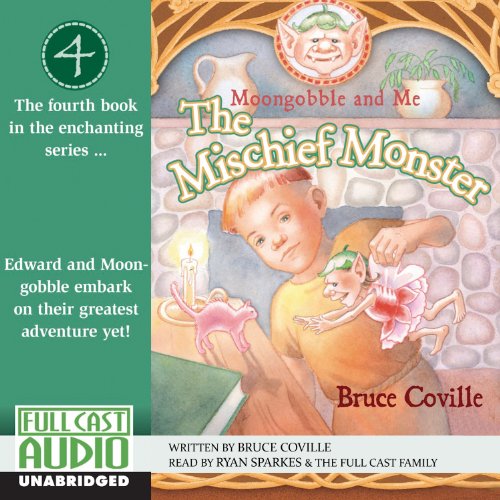 By: Bruce Coville
Narrated by: Ryan Sparkes
Try for £0.00

Adventure, magic, and humor abound in this latest Moongobble & Me installment. Edward and his friends set off on a quest to return Snelly, a princess Mischief Monster who has run away from home, before she is found missing. As usual, Moongobble's magic is not quite perfect, and things get complicated. This full-cast audio performance delivers a dynamic and engaging listening experience. A talented cast imparts each character with a unique personality: Edward is the calm voice of reason; Snelly is high pitched, whiny, and annoying; and Moongobble is nice but flustered. Ryan Sparkes narrates well, giving the performance unity and moving it along. Occasional musical accompaniment and sound effects highlight events in the story.

Moongobble has completed his three mighty tasks. But just when Edward begins to fear that their adventures might be over, an annoying little monster called Snelly comes bounding into their lives.

Soon Moongobble, Edward, Urk, and Fireball the Dragon begin a fearful journey to return Snelly to her home. They want to bring along the Rusty Knight, but he's gone missing!

The threads of the story come together to make another merry, magical adventure for Edward and his friends - and another sparkling listening experience for Moongobble's young fans!

"Brimming with magic, humor, and action, this fourth entry in the Moongobble and Me series will appeal to fantasy fans. Cliff-hangers and snappy dialogue propel the reader through the story, which stands on its own, thanks to author Coville's ability to slip in plenty of background information." ( Booklist)

What listeners say about The Mischief Monster

Where does The Mischief Monster rank among all the audiobooks you’ve listened to so far?

The Mischief Monster is one the more engaging story lines for children. There is humor for the young throughout!

Moongobble is a favorite character because he faces challenges!

What does Ryan Sparkes bring to the story that you wouldn’t experience if you just read the book?

Very imaginative tonation and rich voice quality to emphasize each character so you can easily follow along and enjoy listening.