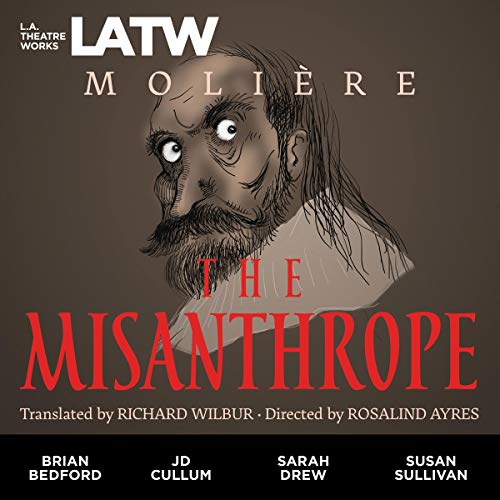 This timeless comedy of manners is considered one of Molière's most probing and mature works. While it's still an exemplar of 17th century farce, Molière went beyond his usual comic inventiveness to create a world of rich, complex characters, especially in the cynical title character Alceste, played here by the Tony Award-winning actor Brian Bedford.

Includes an interview with Larry F. Norman author of The Public Mirror: Molière and the Social Commerce of Depiction.

Recorded at The Invisible Studios, West Hollywood in June 2012.

Lead funding for this production was made possible with support by the Sidney E. Frank Foundation.

I recommend this item. This play is significant in the history of classical French literature and indeed in the history of Western lit. The translation by Richard Wilbur is nothing short of excellent. It is in rhyming verse, which makes it more entertaining. Other great playwrights like the Bard used rhyming verse only occasionally. Also, this play goes to the heart of something inherent in human nature. In everyone, perhaps, there is a tendency to want to tell the truth, even when it might hurt or offend or insult others, but also a tendency to be diplomatic and polite and keep one's truth to oneself. This is one of my favourite plays in all the repertoire.

What made the experience of listening to The Misanthrope the most enjoyable?

Great play. Great recording with dynamic use of sound and fine dramatic narration.

What was one of the most memorable moments of The Misanthrope?

Alcest's showdown with his lady.