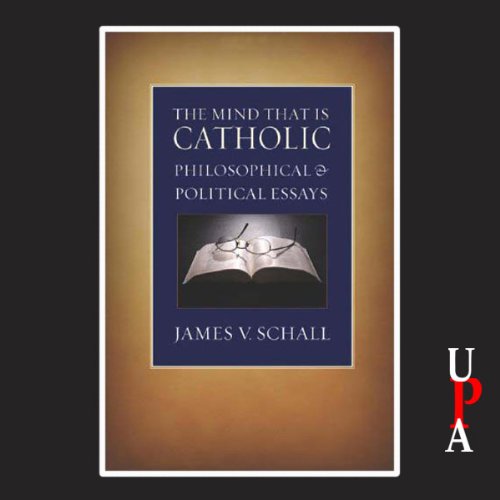 The Mind That Is Catholic

James V. Schall is a treasure of the Catholic intellectual tradition. A prolific author and essayist, Schall readily connects with his readers on sundry topics from war to friendship, philosophy, politics, and to ordinary everyday living. In his newest work, The Mind That Is Catholic, he presents a retrospective collection of his academic and literary essays written in the past 50 years. In each essay, he exemplifies the Catholic mind at its best, seeing the whole, leaving nothing out.

The Catholic mind seeks to recognize a consistent and coherent relation between the solid things of reason and the definite facts of revelation. Its thought aims to understand how they belong together in a fruitful manner, each profiting from the other; each being what it is.

This delightful book is not polemical, but contemplative in mood. Schall shares with listeners a mind that is constantly struck by how things fit together when seen in full light. He brings to his work a lifetime of study in political philosophy, a wide-ranging discipline that, in many ways, is the most immediate context in which reason and revelation meet.

The Mind That Is Catholic respects what can be known by faith alone. But it also considers what is known by faith to be itself intelligible to a mind actively thinking on political and philosophical things. The whole, at the risk of its own contradiction, does not exclude the intelligibility of what is revealed. The book is published by Catholic University of America Press.

"This collection belongs in every college and university library and, if used as supplemental readings, Father Schall's insights and reflections could provide the basis for important and much needed "conversations" in politics, philosophy, and religion courses. But this is not a book to be read lightly or to be read at just one or two sittings. Each essay deserves to be read, digested, and re-read while also discovering and reviewing its sources." (Michael R. Dillon, American Catholic Studies)

What listeners say about The Mind That Is Catholic

This is one of the best books I've read regarding human thought, divine creation, worship, and politics. As a non-Catholic I have been challenged and stimulated by the philosophical depth and insights of the author. I highly recommend this for anyone looking for spiritual and ethical truth.

I listened to this in my car, and the narrative just plods along. I'm a lifelong and committed Catholic, so I would have been interested in what the author had to say, but I just couldn't stay with it listening to it in my car. I've had no trouble keeping up with other authors such as Thomas Merton, C.S. Lewis, Richard Rohr, or Tim Keller.

I really can't even remember any of the points he was trying to make. The only thing I can remember is him talking in great detail at one point about the lives of Plato and Socrates.