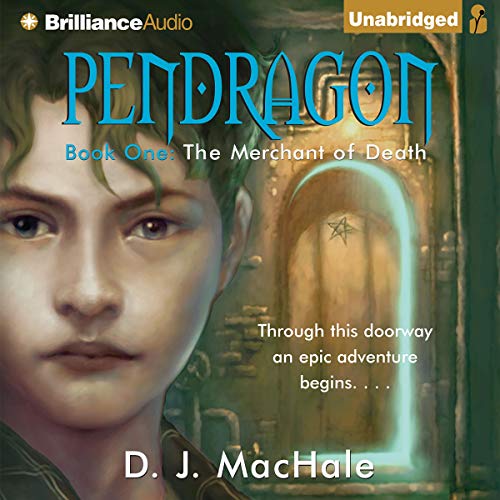 The Merchant of Death

The Merchant of Death

Bobby Pendragon is a seemingly normal 14-year-old boy. He has a family, a home, and even Marley, his beloved dog. But there is something very special about Bobby: he is going to save the world.

And not just Earth as we know it. Bobby is slowly starting to realize that life in the cosmos isn't quite what he thought it was. And before he can object, he is swept off to an alternate dimension known as Denduron, a territory inhabited by strange beings, ruled by a magical tyrant, and plagued by dangerous revolution.

If Bobby wants to see his family again, he's going to have to accept his role as savior and accept it wholeheartedly. Because, as he is about to discover, Denduron is only the beginning.

Great reading of a great book

really enjoyed listening back to a story I loved when I was younger, will be getting the whole series.

DJ MacHale takes you on a wild ride with Bobby Pendragon. William Dufris does a fabulous job reading these books. I really got into the entire series and enjoyed them thoroughly. I do recommend reading them in order, but each could stand alone on their own merits easily. The pace is fast and furious and the plot twists keep you interested 'till the very end. I highly recommend ALL the Pendragon books!

The Merchant of Death (Unabridged

This is a fast paced book. It is well narrated. We listen to these in the car and it kept the whole family entertained and wanting more. The only bad part was when it finished and we did not have the next book to go on with. Fantastic for all ages.

Series is Awesome. Narration not so awesome.

I am re-reading the series because I enjoyed it so much. I thought I'd add the audio to my collection. The story is still exciting and unpredictable, but I don't think the narration adds much. Dufries is good with adding vocal excitement to his narration, but there is a whine-factor to his style that takes away from the story. He did the same to the Enduring Flame Series. I know Pendragon is a teenager and they are supposed to whine, but his translation is more of a two-year old's.

Stay with the book, unless audio is your only option. If you have a Kindle, buy it first, and then get the audio for $3.99.

After listening to this, (for you dads out there) the storyline reminded me of Mark Twain's "A Connecticut Yankee in King Arthur's Court" - whereby the main character is transported to a less advanced civilisation - using their wits and brains they save the day.

For the kids, this was more like Alex Ryder crossed with "The Traveller". The boy is a "choosen one" who unknown to him, is being mentored, travels with his "uncle" through different worlds to fight on behalf of good against an evil foe that is present in worlds.

The narration by William Dufris has light and lively pace that is definitely young adult. Something for both father and son to enjoy together..

The story develops a young self-centered boy into a great adventurer and hero. Every boys dream. Excellant read.

Interesting story, but the writing is annoying

I found this to be an interesting story line, and reasonably well developed. I am interested in how the series turns out. Unfortunately, the main character tends to go on and ramble far too much about analogies, and past experiences. In the middle of an exciting time in the story he will take 10 minutes to relate something back to an earlier childhood experience. I was often left with the feeling "when will he just get on with the story"I liked the performance for the most part, but my wife thought the narrator had problems with women's voices and he made them very breathy.

Did William Dufris do a good job differentiating all the characters? How?

Yes, but the women were a little unrealistic in their breathy voices.

Mediocre writing made worse by a mediocre narrator

What disappointed you about The Merchant of Death?

There are quite a few things I didn't like about the book. Most of the characters are whiny, unbelieving and in need of a kick in the pants. The plot is predictable. The contrived friends reading a journal narrative framework distracts from any tension or energy that the plotline could have worked up. The fact that the entire book is written as a journal assures the reader that the idiot protagonist is never in any danger of actually being snuffed out by the baddies. The baddies are also tragically incompetent. Note for future authors, if you paint a antagonist as intelligent, ruthless and more than willing to destroy something in his way without thinking about it... DON'T abandon this when he learns of your hero.

The idea of the two frameworks... story time... and the real world... is an interesting idea. It could have worked. It didn't. But that might be the fault of the narrator. Least interesting... Yet another whiny 14 year old.

*sigh* It's hard to describe... He detracts from the writing in so many ways. His voice grates. I could probably stand his voice in conversation or in a work environment but for HOURS straight in my ear? His delivery of Bobby makes it sound like a stereotypical oppressed geek trying to deliver the lines of a nerd jock who is awesome. It's just hard to swallow. This also makes Mark, the geeky sidekick, even more of a stereotype.

Also, several times I would lose track of who was talking in conversations due to the narrator not differentiating enough between the characters. When they are of different genders... this is kinda sad.

If you can get it free and are out of other books... Sure, might be worth a read or a listen. Spending a credit on this or real money... no way. Jim Butcher, Orson Scott Card, Heinlein's Juveniles(for the kids), late Heinlein(for the adults) or a number of other excellent authors would be better choices.

I loved this series as a kid. I should have never reread it, as book are much better written nowadays. But with the right reader, I think the series might have been saved. Dufris makes Bobby so whiney and hyper. Not the hero of my youth. He emphasized all of the books flaws and shoved them in your face. I would love to hear a new version with Kirby Heyborne. Sometimes I would repeat the sentance in my head how Kirby would read it and it made it instantly better. How do we get him on this project?

We (husband and I) love the "Pendragon" books and we were very excited to share them with our children. We decided to introduce them to Pendragon via audiobook. I purchased it and was so excited to press play. However the voice of the narrator instantly made the hair on the back of my neck stand up. My husband kept saying "Nooooo!" "Noooooo!" over and over as we listened. We pushed stop less than 1 minute into the book. We will not be introducing our kids to these books via audiobook, and im seeking a refund. Yikes.

Loved this series when I was younger, the narration serves to make the seriousness of the book dissappear entirely. It could use to be more serious and less childish sounding but I also realize that it is a children's book. All in all interesting read