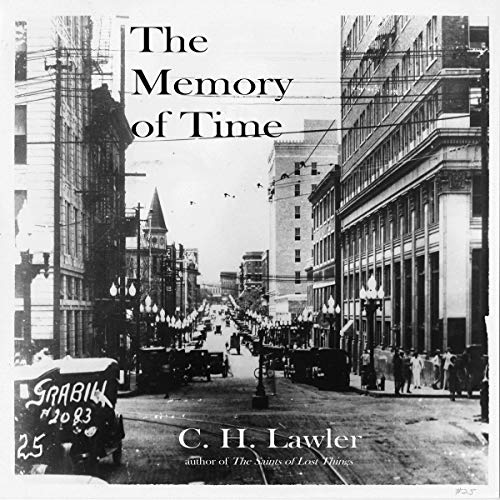 The Memory of Time

The Memory of Time

Pretty young New Yorker Miriam Levenson finds herself here employed in the only job she can get - interviewing the elderly for the Roosevelt Administration’s Federal Writers Project. Among the people she meets are an aging Civil War hero, a French muralist and his common-law wife, and a 95-year-old Irish immigrant named Bridget Fenerty, a woman who has known tragedy and refused to buckle under it.

Winter turns to spring, and Miriam finds there are people in this town who have secrets. And as she is followed by a mysterious man in a black Cadillac, Miriam finds that she, too, has a secret.

Generally predictable multi-generational saga spanning 1840s-1930s but voice actor Brookfield is spot-on juggling myriad accents, inflections and cadences from plucky, heart-o-gold Irish brogue to Deep South drawl to Texas twang to New York wiseacre. A tough assignment well-done. Could have been a muddled mess as an audio book, but she totally nailed it. Have added her to my list of five-star Audible actors.

I loved The Memory of Time. I felt like I became a part of the characters lives; I could hear Bridget’s laugh, and feel the snow hitting my face as vividly described by the author. It was such a pleasure to read that I hated getting to the end.

Grainne Brookfield, beautifully and masterfully narrates this multi-generational story of the remarkable Irish immigrant, Bridget Fenerty, and the idealistic New York journalist, Miriam Levenson, whose destinies bring them together in Shreveport Louisiana. In the relentless pursuit of their truth north, neither women would bow to societal norms, surrender to fear, cower under opposition, wallow in self-pity or abandon the high ground. The reader is truly inspired to follow suit.

Brookfield not only exquisitely and precisely inhabits the larger-than-life personalities of Bridget and Miriam, she also flawlessly captures the spirit of the people who come into their lives over the years. She breathes life into each character with perfectly executed accents, cadence and nuances. The author, C. H. Lawler, makes his audio performance debut as New Yorker, Patrick Levenson, Bridget Fenerty’s beloved great nephew, proving himself talented as both a writer and a narrator.

I anticipate listening to this stellar audio performance many times in the future. It is definitely among my favorites.


3 of 3 people found this review helpful

As an avid consumer of historical fiction for decades, this book is definitely in my top ten books of all time favorites. From narration, to content. Enjoy this book and savor it. It will stay with you.

The different stories were nicely woven together and the performances were very good and authentic, taking place in our historical past.

Truly one of the best books I’ve listened to all year. A sweeping tale in which the you find yourself completely immersed. The characters are lovable. The narration is perfect.

This book tells a wonderful story, however the dialects in the narration almost caused me to turn it off. The main protagonist, a Manhattan raised Barnard graduate, is given the accent of a working class Brooklyn woman of the time. The dialects of the African American characters are stereotypical, and the drawl by the character from Texas is also a farce.

I don't know who decided to produce this book in the way that it is presented, but in my opinion, it should be re-recorded in a manner befitting the amazing story that it tells.

This book had a slower start for me, but I would not have had the amazing experience I had if I hadn’t pressed on.

It was actually an historical fiction that made me cry, laugh and drew me into the pages and lives of fascinating people. The history of the era of President Roosevelt in Shreveport,LA and the visuals, dialects, and accents...amazingly portrayed by the narrator was compelling and entertaining.
Her portrayal of all these different accents made me check again to see if there were multiple readers‼️
The only thing that would made more of an impact (which was so high I couldn’t bear for it to end) would be to read it all over again. Which I’m going to do.
A splendid read for men and women. Young and old. Audible...I just think it would be a dismal prospect of a day without your books. Thank you. 📚❤️

The author must be fun to hang with. Full of tragedy and the dark side of life. Had to quit listening as it was beyond belief.