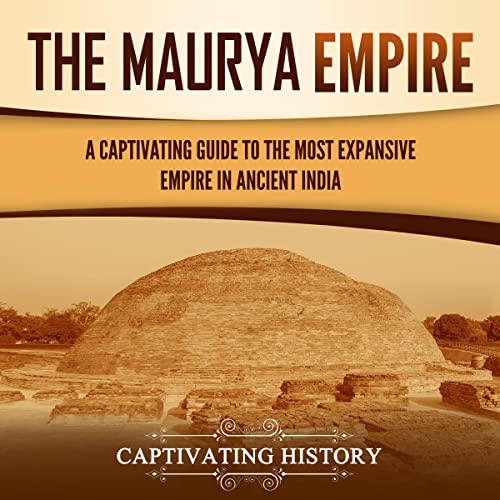 By: Captivating History
Narrated by: Colin Fluxman
Try for £0.00

If you want to learn about the most important source of inspiration and symbolism to modern-day India, then pay attention....

The Maurya empire, which existed more than 2,000 years ago, was the mightiest civilization that India has ever known. It was more than one and a half times the size of modern-day India in geographical extent. The Maurya empire was established just after the death of Alexander the Great. Fear had prevented his troops from marching farther to invade the subcontinent, which became the fuel for India to reinvent itself as an indomitable mega-culture.

During the reign of nine emperors and over 140 years, the Maurya empire dominated the region. While it was a monarchy, the rulers ensured the empire’s longevity and widespread loyalty by putting their subjects first. In a stroke of genius not seen before in the ancient world of conquering and bloodshed, the Mauryan emperors built infrastructure and roads not just for trade but also for the health and well-being of the people and animals.

In essence, the Maurya empire was supremely advanced for its day and age.

In this audiobook, you will discover:

Don’t miss this opportunity to learn about Mauryan history; scroll up, and click the "buy now" button!

What listeners say about The Maurya Empire

Yet again, an excellent account of an ancient empire which encompassed most of India, as well as parts countries bordering it. The empire continued on through generations engaging in constant warfare and conquering lands and people. The Emperor Ashoka was a ruthless leader until a particularly brutal war resulted in a huge number of people dying or enslaved. Ashoka, full of remorse, found the teachings of Buddha, and thereafter spread peace and harmony throughout the land. I would definitely recommend this audiobook to anyone interested in the history of Ancient India.

a bit dull for my tastes

I tried pretty hard to follow this one. I even almost gave up on it, but it was fairly short. I had heard about this empire through the previous book on ancient India, so I thought I'd like this too. Sadly, no.

I did enjoy the narrator overall. only a small critique I noticed in the beginning chapters. he would start a chapter and proceed with sounding like he was just starting a normal sentence but was actually naming the title of the first section of the chapter. it threw me off at least once, so that's why I said only a small critique

I had never even heard about the maurya empire before reading this book. this book is excellent.

This book was very captivating. I am Buddhist, have read much of this kingdoom and King Asoka. This book with it's extensive research had made it more intriguing to listen too.