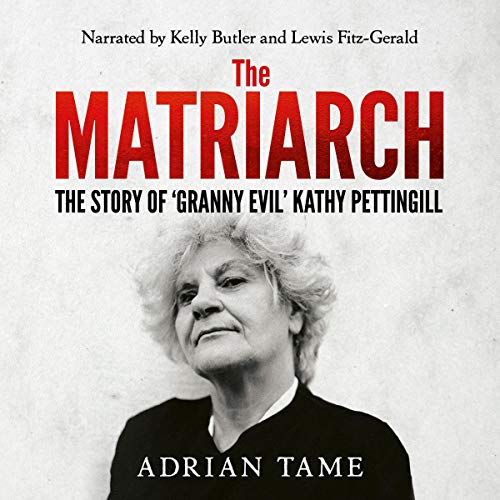 By: Adrian Tame
Narrated by: Lewis Fitz-Gerald,Kelly Butler
Try for £0.00

The matriarch of Australia’s most violent and notorious criminal family, and allegedly the inspiration for the award-winning film Animal Kingdom, tells her side of the story.

Kathy Pettingill is a name that’s both respected and feared, not only by Australia’s criminal underworld, but by many in the Victorian police force. As the matriarch at the head of the most notorious and violent family of habitual offenders in Australian criminal history, her life has revolved around murder, drugs, prison, prostitution, and bent coppers - and the intrigue and horror that surround such crimes.

Her eldest son, Dennis Allen, was a mass murderer and a $70,000-a-week drug dealer who dismembered a Hell’s Angel with a chainsaw. Two younger sons were acquitted of the Walsh Street murders, the cold-blooded assassination of two police officers that changed the face of crime in Melbourne forever. One of the two, Victor, was gunned down himself in the street 14 years later, becoming the third son Kathy has buried.

In this revised and updated authorized edition of Adrian Tame’s best-selling The Matriarch, Kathy Pettingill reveals the chilling truth behind many of the myths and legends that surround her family, including her experiences in the blood-spattered charnel house at the centre of Dennis Allen’s empire of drugs and violence.

But this is no plea for pity. Forthright and deeply disturbing, like its subject, The Matriarch pulls no punches.

Updated and revised for a new generation, this true crime classic is as terrifying and powerful as when it was first published.

What listeners say about The Matriarch

Audible says I need to have a minimum fifteen word review, but I think my headline says enough.