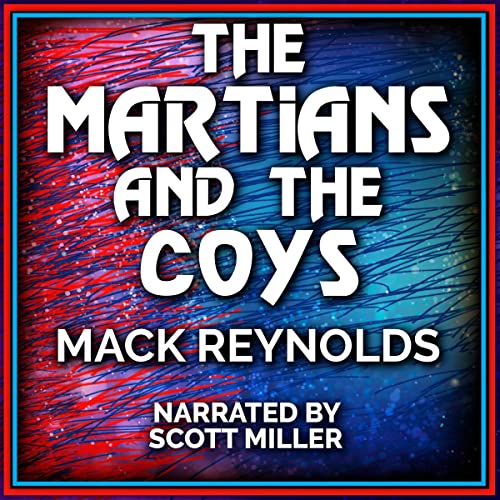 The Martians and the Coys

By: Mack Reynolds
Narrated by: Scott Miller
Try for £0.00

Lem didn't like guarding the still while Paw and the boys went feuding. He wanted to get a shot at some Martins too! Yup, he sure did....

Maw Coy climbed the fence down at the end of the south pasture and started up the side of the creek, carrying her bundle over her shoulder and puffing slightly at her exertion. She forded the creek there at the place where Hank's old coon dog, Jigger, was killed by the boar three years ago during the hunting season. Jumping from rock to rock across the creek made her puff even harder; Maw Coy wasn't as young as she once was.

On the other side, she rested a minute to light up her pipe and to look carefully about before heading up the draw. She didn't really expect to see any Martins around here, but you never knew. Besides, there might've been a revenue agent. They were getting mighty thick and mighty uppity these days. You'd think the government'd have more to do than bother honest folks trying to make an honest living. The pipe lit, Maw swung the bundle back over her shoulder and started up the draw. Paw and the boys, she reckoned, were probably hungry as a passel of hound dogs by now. She'd have to hurry.

When she entered the far side of the clearing, she couldn't see any signs of them so she yelled, "You Paw! You Hank and Zeke!" Maw Coy liked to give the men folks warning before she came up on the still. Hank, in particular, was mighty quick on the trigger sometimes. But there wasn't any answer. She trudged across the clearing to where the still was hidden in a cluster of pines. Nobody was there but Lem. She let the bundle down and glowered at him. "Lem, you no-account, why didn't you answer me when I hollered?" He grinned at her vacuously, not bothering to get up from where he sat whittling, his back to an old oak. "Huh?" he said. A thin trickle of brown ran down from the side of his mouth and through the stubble on his chin.

What listeners say about The Martians and the Coys