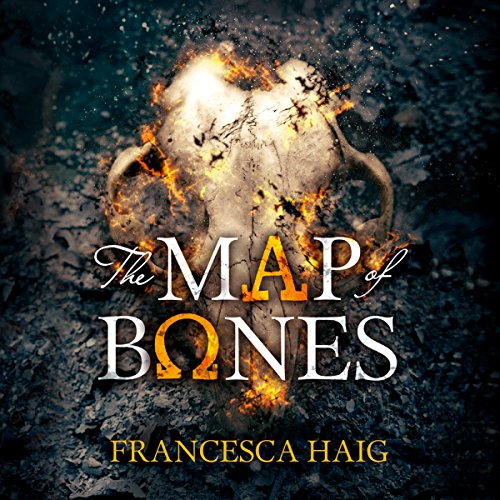 The Map of Bones

By: Francesca Haig
Narrated by: Yolanda Kettle
Try for £0.00

The Omega resistance has been brutally attacked, its members dead or in hiding.

The Alpha Council's plan for permanently containing the Omegas has begun.

But all is not entirely lost: the Council's seer, The Confessor, is dead, killed by her twin's sacrifice.

Cass is left haunted by visions of the past while her brother Zach's cruelty and obsession pushes her to the edge and threatens to destroy everything she hopes for.

As the country moves closer to all-out civil war, Cass will learn that to change the future she will need to uncover the past. But nothing can prepare her for what she discovers: a deeply buried secret that raises the stakes higher than ever before.

"This book is a thought-provoking whirlwind of a story, with a fab lead character, grisly politics and brave adventure. I loved it!" (Jessie Burton)
"A hell of a ride. I would recommend it to anyone I can, regardless of age." (James Oswald)
"Set in a vividly realised world of elite Alphas and their 'weaker' Omega twins, it holds a mirror up to our obsession with perfection." (Guardian)
"Words like 'masterpiece' and 'instant classic' are cliché, but in the case of Francesca Haig's astounding The Fire Sermon, they're the only words to use." (Starburst Magazine)
"This terrific set-up spools out into a high tension tale of mistrust and dependency, injustice and optimism, told with poetic intensity." (Daily Mail)
"Haig's post-apocalyptic world is colorfully fleshed out, and the conclusion ask us to consider who, really, is the Other." (Washington Post)
"With its well-built world, vivid characters and suspenseful plot, this book...is poised to become the next must-read hit." (Kirkus)

What listeners say about The Map of Bones

excellent storyline. brilliantiy cooncieved world. wished this and @st book was longer. though. think the work deserves it. author has a great future if this is just beginning. only 4 stars. because nearly lalways reserve five for the great epic"s.

The author writes poetically and beautifully, telling the 2nd part of this story of a post-apocalyptic primitive world in which residual radiation damage causes every family to give birth to twins - one normal, one deformed. The normal twins are the ruling "Alphas", the deformed ones the rejected "Omegas". The twins are linked so strongly that if one dies, both die. Many Alphas are on the ruling Council, and the Council members are fighting among themselves. The danger of attack or assassination by killing their twin to get rid of them leads many Alphas to lock up their twins to keep them safe. Then they discover old technology from before the nuclear destruction. This allows them to develop "holding tanks" full of viscous liquid to hold people in suspended animation, tubes attached to wrist and mouth. In this story, the Omega resistance tries to fight against the Council's plan to "tank" every single Omega.

Cass, the main character, is an Omega Seer, her difference being not physical but mental. Her visions tell her what the Council is up to, feel the way, and predict the future. Her twin, Zach, is a ruling figure on the Council who is the most over-zealous in implementing the tanking plan.

This story charts the progress of the resistance as they try to stop the relentless tanking and the Alphas' deadly agenda before it's too late. Their secret haven, the Island, their mission to discover life beyond their continent, and what they discover from before the nuclear holocaust are all they have to save them, but at every turn the ruling Council thwarts them. They manage to sabotage the Council's plans but this only slows the Alphas down. Their ultimate aim is the destruction of the Omegas by tanking them all.

Then the Council discovers an underground Ark which contains much of the knowledge of life before the nuclear blast. What they find will enable them to destroy even life beyond their own country (where the people from "Elsewhere" have discovered how to end the twinning by allowing everyone to carry a mutation). Can Cass and Zach stop them in time? Can they reach out to Elsewhere before it's too late?

The narrator is good enough, with a measured, calm, pleasant voice, but apart from twins Zoe and Piper having the same accent, she doesn't have different voices for different characters (even the ancient old lady Sally has only a slightly gravelly tone, and the stranger Paloma's excessively outlandish accent deacribed in the test is produced only as a faintly Irish burr). And sometimes she misses cues and places emphasis on the wrong word or a pronunciation is slightly askew (eg "the sentries' view" becomes "the sentrices view"). But although this doesn't detract from the excellent story, it just doesn't especially add to it.

This builds wonderfully on where The Fire Sermon finished. The emotions are present but in proportion and the plot also progresses in a realistic way, which both make a nice change for this genre.
Haig is a published poet and it really shows in her writing style - she has a colourful vocab and makes excellent use of imagery.

narrator is easy to listen to

It is an easy listening book, the narrator has a lovely style of reading it

Sadly not as good as the first book, the main character can be very grating which makes it difficult to get behind her. it was once again very well narrated.

Boring. Not as good as first book

Might just be me bit I didn't enjoy this at all. First book was great though

Would you try another book written by Francesca Haig or narrated by Yolanda Kettle?

I really enjoyed the Fire Sermon - the first in the series - and highly anticipated the second volume, expecting more of the same. However, the book lacked the depth of story, interesting narrative and shocking revelations for almost 7/8ths of the book. I might purchase the last book but I might not. Yolanda Kettle's narration has been good throughout but I struggled to concentrate - a product of the writing not the narration.

If you could play editor, what scene or scenes would you have cut from The Map of Bones?

I would have cut most of the first 2/3rds of the book or rewritten them entirely. After the pace and revelations of the first novel, I found Map of Bones tedious and uninteresting in many parts.

I must reiterate, I really enjoyed Fire Sermon. I read a lot of fantasy and science fiction and I found the idea of mutated twins in a post-apocalyptic world extremely original and engaging. I am really crushed that I didn't enjoy Map of Bones.