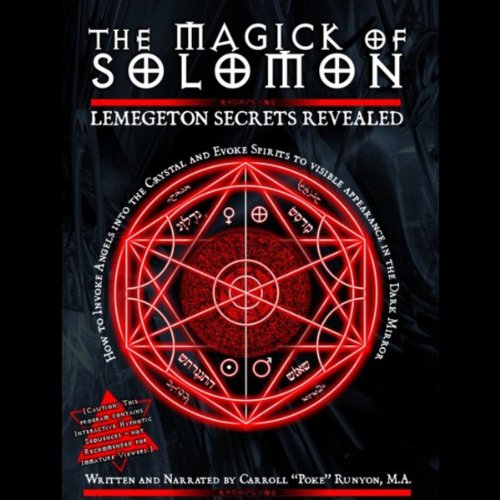 The Magick of Solomon

An anthropologist and ceremonial magician, Poke Runyon explains and demonstrates the authentic techniques of ancient ritual magick. Learn how to invoke angels and spirits to visible appearance. Stand in the magick circle with masters of the art as they conjure the spirits of Bael and Astaroth (Baal and Astarte) to visible appearance in the dark mirror upon Solomon's Triangle.

Discover the scientific truth and psychological validity behind our own culture's unique and powerful form of shamanism. Experience the mystery and transformative power of Solomon's magick! Learn how the forgotten secrets of magick were re-discovered. Learn the truth about angels and demons.

What listeners say about The Magick of Solomon

Audio straight from the DVD

The material was fine, but it really is lost with out the video, you can't see what they are talking about or doing.

Would you recommend The Magick of Solomon to your friends? Why or why not?

Did Poke Runyon do a good job differentiating all the characters? How?

Amazing he sounded just look a women in some instances or was there someone else talking hard to tell would have needed to see the video.

Did The Magick of Solomon inspire you to do anything?

Get another book on the subject

it was good until the Humming part,i honestly thought it was great until that point.

This audio "book" isn't a book at all but sounds like the soundtrack from an old B movie. A complete waste of time and money.

The book wasnt very helpful. Too vague to have any practical use. Theres a free video of it on YouTube.

thought it would.cover more of the actual material involved, and less of his story, but decent none the less.

I have always been really into the story of Solomon and his endeavors I found this book to be extremely informative on the teachings of Solomon.

I just wish that it had lasted longer.
I am in constant search for non-fiction, specifically for the magickal arts. This is exactly that.

not even an audio book it's audio ripped from VHS

the concept was of interest but it's just audio ripped from an old vhs tape. completely useless