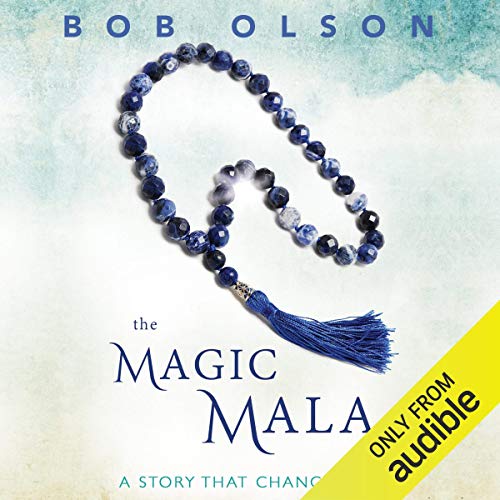 By: Bob Olson
Narrated by: Alan Adelberg
Try for £0.00

The Magic Mala (pronounced mah-lah) is the story of Robby Robertson, a down-on-his-luck writer who realizes that he doesn't know as much about life as he once believed. His desperate financial circumstances lead him to open his mind to new ways of living. After finding some mala beads, Robby is taken on a magical journey that teaches him the secrets to personal manifestation and happiness.

An inspiring novel that transforms the lives of its readers, this book will leave you fascinated and educated about the universal laws that govern our lives. It's a story you'll want to read often to remind yourself of its wisdom-primarily, the magic of living a conscious life. More importantly, The Magic Mala will help you recognize the power you've always had but didn't know was there: your inner ability to create the life of your dreams.

What listeners say about The Magic Mala

Sweet story with a message that inspires

Loved this book . Loved the characters but most of all grateful for the wisdom . Also loved the narrator , he did a great job and kept me engaged with his story telling :)

Bob this is a fantastic book, I found out yesterday on one of your YouTube videos it had been made audible I was made up I got it right away and I love it!
And the Alan Adelberg done a great job Thanks Bob and Melissa x

This is a rehash of much earlier books on positive thinking, nothing new except some shiny beads. The story was overdone and became tedious after a while. If you’re into this kind of thing there are better books on the subject out there.

Positive and Uplifting explanation of how thoughts create your world.

So many books have been written about how your thoughts connect to the Universe. This audiobook gave me amazing visualizations and I was hooked by chapter two, listening to how the thoughts of the characters are so entwined with in all of us. I have been following the author via his very first podcast, and feel a very strong connection and gratitude for the information I gained from him during very difficult times in my life. There are many characters that teach and learn the power of intention in this book. I consider it a must read and send you a big thank you for writing it. God bless you and Melissa!

I have enjoyed and appreciated the author's radio program for several years since the passing of my husband. Bob Olson's presentations are like having a chat with an old friend: comforting, uplifting, and informative. Bob's book, The Magic Mala, is just the same. I especially enjoyed how he was able to create a metaphysical primer of sorts, offering just about all of the most important nuggets of wisdom that would normally take years to read and study if done one at a time from many different ancient and modern texts. Yet, the author was able to fit those precepts into one little book by crafting an entertaining story with characters and situations that just about anyone in the modern world can relate to. If you are new to the concepts of manifestation ... or if you are a longtime student of metaphysics, you will enjoy this story all the same. Though I have always been an avid reader, my schedule these days leaves many of my "get to" books unread on the shelf. So I got the audio version of the book. The audio reader was great at bringing the story to life with his mellow voice and his ability to impersonate the character voices. Thumbs up!

Omg! Where do I begin? Truly inspiring and thought provoking. A MUST read for all ages. Thank you Bob!!

This story is one that will be told for a LONG time. The performance is amazing and very captivating. I absolutely loved everything about this book!

Absolutely loved this book! It’s everything I have heard of before and learnt about already however in the context of a story I found it engaging and relatable. The narrator did a fantastic job with the voices of the different characters. I will be listening to this again and again.

my second time listening and I learned something new and still loved the story. thanks for writing this uplifting book!

A great inspirational story that weaves spiritual principles to empower each person to create the life they want. Share this book along with a Mala bead set to your loved ones. I can’t think of a more meaningful gift. ❤️

Life gets so crazy and then crazier at times. I’m always trying to figure out how to calm myself and not lose myself in the chaos. This book inspired me to look into meditation and even use it in my classroom.

This was not what I was looking for or expecting and to be honest I did not care for it much when I started. I was however driving my car and so I continued. Initially I thought this would be a non fiction book. I love using malas and mantra. I was worried it would be new age laws of attraction which I don't care for.

On the contrary this is a beautiful spiritual story about how the laws of the universe work. and how we draw things to ourselves. I love it and will recommend it. Thank you for adding Light and Love to the world.

Shameless plugs for products and companies.

Many plugs for businesses and products. There's something about the narrator voice that is cloying, in particular when he does the female voices. Great information though. This keeps me coming back despite the delivery and shameless plugs.