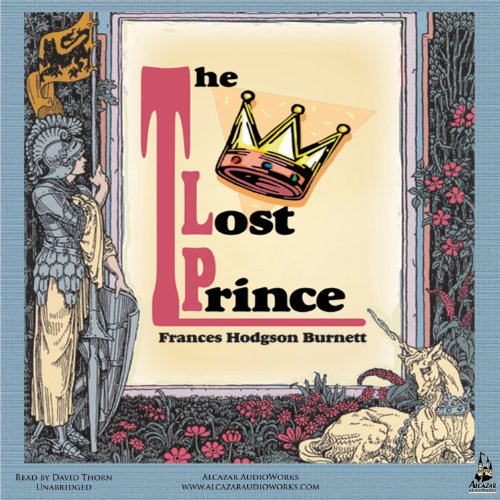 The wonderful adventure story of two boys, one the son of a mysterious impoverished grandee and the other the handicapped son of a n'eer-do-well drunkard. The boys together travel thru Europe on a Secret Mission and help wrest a fictitious country called "Samavia" from its wicked rulers and place the legendary and rightful heir on the throne denied the dynasty for over 500 years.

“In every nook and cranny, high and low, they sought for him…he had vanished as a star vanishes when it drops from its place in the sky.” From the author of such children’s classics as The Secret Garden and A Little Princess comes this enchanting story of a young boy discovering his true destiny.

Twelve-year-old Marco knows he is being trained for something, but he isn’t sure what. All his life he has traveled with his father in secrecy, learning many languages and the ways of a gentleman, but forbidden to speak about their country of origin, Samavia. Samavia has been fraught with war for the last five hundred years, ever since the prince mysteriously disappeared. But now, there is hope that peace may come at last, as it has been rumored that a descendant of the lost prince may have been found. And Marco is about to take on a secret quest that will change everything for his family and his country.

Frances Hodgson Burnett (1849–1924) was an English-born author of romances and books for children. After moving to America in 1865 she established a popular reputation with the publication of That Lass o’ Lowries in 1877. She is best known for such stories as Little Lord Fauntleroy, The Little Princess, and The Secret Garden.

What listeners say about The Lost Prince

A book for the whole family.

This is a much overlooked jem from a great children's author. I was read it and never forget how much I enjoyed the adventure. It is a perfect story for all the family.
The narrator is very good but the chapter announcements punch a hole in the flow that brakes the immersion into the world of the boys.

A gem of a book, and a thumping good story

What did you like most about The Lost Prince?

I loved this book as a child, and always found its wonderful passion and boys own adventure storyline unexpected after books like the Secret Garden and A Little Princess (which I also loved). I wasn't sure how it would hold up, listening to it as an adult after so many years, but it remains my favourite in all her works, and one of the most engaging audio books I have listened to in ages. Thumping good story, if one suspends cynicism about the nature of all rulers and regimes, and I particularly appreciated the character of the Rat.

What does David Thorn bring to the story that you wouldn’t experience if you had only read the book?

My heart sank when I heard the intro and chapter headings read by a lady whose voice really did not suite the material. But then, thank goodness, David Thorn started to read the content. He has a slightly archaic accent, and it was like having the book read by someone who lived during the times in which the book was set. He's a great reader who really seemed to enjoy and relate to the storyline and characters, and did good voices and accents for the characters. Added a lot to the experience.

Yes, I was away on holiday and had an absolutely delightful time listening to this over a couple of days while knitting and looking at a splendid view.

Suspend disbelief and listen to it! It's a gem

This book gets you hooked in the first half as you imagine all sorts of delicious directions of possible development. Sadly, the the second half leaves you wishing the first half wasn't so good... so you don't feel like you need to finish it. The ending is so obvious that you really don't need to read it, because your imagination will probably be better anyways. Also, the strong Christian symbolism is muddled by the addition of strong Buddhist mysticism in the second half. It would have been better to stick to one or the other, especially since pure Buddhism is not accurately represented by the theology/mysticism portrayed in this book and trying to couple it with Christianity seems to represent a misunderstanding of the end goal of both religions.

The first half of this book promises an epic adventure with wit and wisdom. Unfortunately you don't realize that you reached the climax until it's over as the ending is something you knew would happen after the first chapter.

David Thorn's performance is excellent, but not miraculous. Sometimes the voices of the Rat and Marco are easily confused as Marco's whisper sounds just like the Rat's talking (The Rat is a boy, not a furry rodent - no talking animals).

I hope this book is never made into a movie because the potential for the over-eager movie industry to make it worse is too great. They would remove the innocence, which is the main redeeming quality, and replace it with bickering and whiny drama. The positive addition of some good action scenes would not be enough to compensate.

Don't get this book for your kids as it will only confuse them. I encourage a listen out of curiosity, but anyone who wishes to save a precious credit for something awesome should turn somewhere else. If you like this author, try The Little Princess or The Secret Garden.

I got this audiobook for my 10 year old boy for a book club. He really enjoyed it. I had a long drive coming up, so I thought I would give it a try. It was wonderful! I enjoyed the reader and the story.

Frances Hodgson Burnett is well-known as the author of The Secret Garden. She wrote many other books that are well worth reading or listening to. The List Prince may be her least- known work. Yet it is consistent with her other books. It is a fascinating tale in itself, with deep truths running through it that are larger than any one story. It is also read so skillfully that the narrator’s voice became an organic part of the story itself.

While you may quickly figure out the conclusion of this book, there is something in the telling of it that is beautiful and hopeful! There are few things which a revisit, and this one has become a go-to!

I really enjoyed listening to this story!

The plot was set perfectly. I loved the twists set with the Rat and the travels they undertook.

A beautiful, lesser known story of a famous author

This is one of my favorite story's of F.H. Burnett. Well written, beautifully narrated, and perfect for almost any audience.

Beautiful rendition of a touching book.

I love classics that trash morals and strength of character! This book is a must!