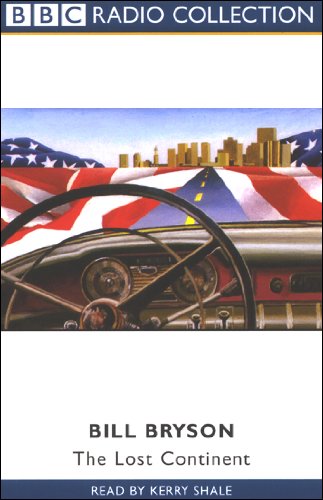 By: Bill Bryson
Narrated by: Kerry Shales
Try for £0.00

Hardly anyone ever leaves Des Moines, Iowa. But Bill Bryson did, and after 10 years in England he decided to go home...to a foreign country.

In an ageing Chevrolet Chevette, he drove nearly 14,000 miles through 38 states to compile this hilarious and perceptive state-of-the-nation report on small-town America.

From the Deep South to the Wild West, from Elvis' birthplace through to Custer's Last Stand, Bryson visits places he re-named Dullard, Coma, and Doldrum (so the residents don't sue or come after him with baseball bats). But his hopes of finding the American dream end in a nightmare of greed, ignorance, and pollution. This is a wickedly witty and savagely funny assessment of a country lost to itself, and to him.

What listeners say about The Lost Continent

Kerry Shales is the best

I haven't listened to the other narrator but I'm worried it won't live up to the superb Shales.

Blast from the past

I remember listening to this with my mum when we were on a long car journey, and for some strange reason I tried to find it, I had given up until I thought I would try the previews, and there was Kerry Shale's familiar voice!!
Kerry Shale is a great narrator, and could make the phonebook sound funny, so added to Bill Bryson' s wit it makes a good 2 hours pastime!

Have read this book, twice. It is excellent. All his books at. A walk in the woods, is my favourite,, it's the top of my dessert island discs list. 5 star

Just as funny as I remember

Listened to this on radio 4 in the car back in the day and remembered it as being extremely funny and erudite. Still in the car now with my son splitting his sides with laughter seems to have not lost any of it's charm. Kerry Shale is a star narrator!

Like all Bill Bryson writing this is witty, dry and very entertaining. I'm not convinced that Kerry Shale is the best choice of reader. The writing stands on its own, it doesn't need the heavy stresses that Shale uses.

I love Bill Bryson's work. Always warm, with a good bit of humor. Listening to his work is always a pleasure with his unique drawl.

THIS READING IS TERRIBLE! The reader on this book is NOT Bryson. He reminds me of the old Fed Ex guy talking so fast as if he can't wait to get it over with. His voice is full of anger and impatience. Every time the reader "does a voice" it sounds like everybody is from the deep south (hint... Des Moines Iowa is in the midwest).

I regret wasting space on my iPod for this pathetic reading. Download any other Bryson work and you'll love it, but avoid this one!

An awful reading of this book

Unlike all the other Bill Bryson books offered by Audible, this book is NOT read by the author. I have downloaded every other book here, but will avoid this one. Just click on "Hear Sample". This reader appears to be in a real hurry to finish the book! I was look forward to adding this audio book to my collection, but will read it myself in good old paper format.