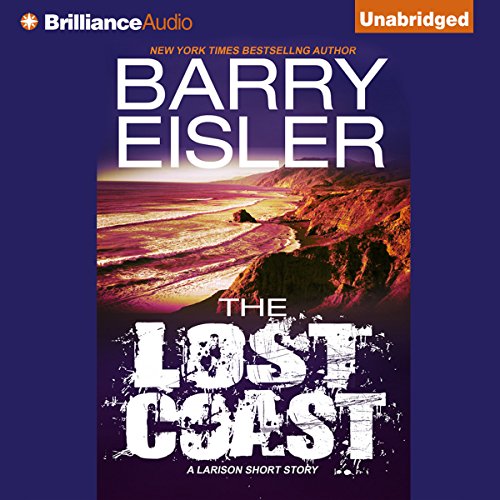 For Larison, a man off the grid and on the run, the sleepy northern California town of Arcata, gateway to the state's fabled Lost Coast, seems like a perfect place to disappear for a while. But Arcata isn't nearly as sleepy as it seems, and when three locals decide Larison would make a perfect target for their twisted sport, Larison exacts a lifetime of vengeance in one explosive evening.

Larison is a Scary Dude

I really liked this short story. Of all the characters in John Rain's world, Larison clearly is the one you never want to mess with. This story is simply a 45 minute answer to "Why wouldn't you want to cross Larison?" Because he is a hardened killer who just happens to have issues as well. Now most of it comes from his time interrogating people. He can't get some voices, images, whatever out of his head. It makes him deadly. And he is gay...so what?!

I think it was Eisler who said, what would happen if Larison came across some homophobes who wanted to beat up gay people? Okay I'm paraphrasing, I hope, but this is what happens. You mess with Larison, you play with death. Larison is the only character in the John Rain world that scares the crap out of me. He's like the silent pit bull that let's the burglar in the house, but won't let him leave because what would be the fun in that? He decides to take a break from looking over his shoulder and steps right in it.

My impression is that this story is very appropriate to the Larison character. In terms of the story, I didn't find anything too particularly graphic. It's what happens, right? If you are use to snapping bones protruding out of skin, or brain matter landing on the sofa, this may not be your thing. But if you know anything about Larison (read Inside Out or The Detachment), it makes perfect sense.

If I want a quick listen to a story in the John Rain universe, this is one of my favorites. I also like the Dox short story, The Khmer Kill too!

Interestingly, the author/narrator did not do his homework on one small but annoying point: the location of this story -- Arcata -- is pronounced "Ar-kate-a" not "Ar-cat-a." After all, Eisler often includes such details as the model of a particular knife. The story is provides a part of the back-story for a character who appears in other books.

Not even close to story line of character...was disapointed not worth the extra cash to make sure you don't miss anything in next big story

What would have made The Lost Coast better?

Reading this, anyone is sure to think that it's going to be some shooter violence revenge. I mean, we're talking about a hardened killer, right? Beating a couple guys up, and then forcing the weakest of them all to perform oral sex on him is not my (or anyone's, I'd think) idea of "a lifetime of vengeance in one explosive evening."

EPIC FAIL.
It may be enough to make me abandon this series, and this author altogether, which would be something I regret as all his other works that I've read or listened to have been great.

But seriously... homosexual rape? That's Eisler's idea of a lifetime of vengeance??
Did I mention: EPIC FAIL?

Has The Lost Coast turned you off from other books in this genre?

It's quite possible turned me off from any new works by Eisler (I've already read or listened to everything currently available by him).

The performance was ok; I'm just so disgusted with the story-line that I didn't want to give any positive review.

If you could play editor, what scene or scenes would you have cut from The Lost Coast?

I'd have cut the entire story...

The story of a villain

Many of the reviewers seem to not get that Larison isn’t supposed to be John Rain II or even Dox. He’s a bad dude. Just conflicted enough to show us his humanity, but you’re missing the point if you think Eisler intends this to be accepted heroism. (Though the weird rebel rock intro and outro confuses that message a bit.)

Honestly I think most of the negative reactions here have more to do with the homosexuality. Usually we get chaste homosexuality in popular media and that’s not what this is at all (though it’s mostly in the scheme of things this is on the spare side for Eisler, if you’re familiar with his heterosexual sex scenes, this doesn’t hold a candle to those). The problem is the ambiguity of scene of fellatio. It’s at knife point, but Eisler portrays victim as a closeted homosexuality who is more dazed at his own self revelation than coercion. Which is....a double standard, frankly. Eisler would never write that scene with a woman even in the same villainous context. So granted that.

(NOTE: If you think a college student is a child then you should have more of a problem allowing them in war, right? Not an original argument, no, but it always blows my mind the hypocrisy.)

Anyway, the point is Larison serves back what a trio of “fag bashers” meant to reign on him, which is as sympathetic as we get with Larison. Because otherwise he’s still the villainous rogue he has has been in the other Eisler novels.

I’ve noticed a couple things recently on Audible concerning Eisler. He has a huge fan base with a hefty portion of those who Eisler seems to be increasingly aware of and to not like and trying to be shake away. It’s hard to imagine this Larison story as not having been intended to piss-off a section of Red Staters who don’t aren’t sensitive to nuances of social and even political leftism that Eisler presents as objective fact (like America is in its twilight, as the villain in the Dox short says....maybe Eisler doesn’t believe it, I don’t know, but it jives with what seems to have been some of his views presented in Detachment).

I don’t agree with some of what is presented, but who cares? I would never just read things I only agree with. And I’m glad Eisler is becoming the kind of writer who doesn’t mind losing readers to say his truths or present provocative ideas.

Don't understand the reviews saying its a graphic rape scene. I would imagine if the readers normally read/listen to books comparable to Eisler, they've doubtless read much more graphic sex/ rape scenes involving women.
In my opinion, the story was typical Eisler, just part of Larison's backstory.
I enjoyed it as much as any of his books.

I was shocked at the violence in this book and did not cope or appreciate the predatory nature of the protagonist and the amount of violence delivered by him. I usually love Barry Eisler, but this was way over the top for me and I felt sick listening to this short story.

We thoroughly enjoyed the entire Rain (seven books) and Ben Treven series (Fault Line and Inside Out) and listened to all of them in order. Willing to try just about anything written by Barry Eisler, it was an easy decision to try the Lost Coast. If you are into graphic homosexuality, then perhaps this short story is for you. Wow - I did not see this coming from Eisler. Extremely disappointed such a talented author would go down this path. This may have been my final Eisler purchase.

Not as bad as the reviews say

If you could sum up The Lost Coast in three words, what would they be?

Not what you expect from Barry Eisler but gives you insight to that freak Larison.

To short to really have one.

If your homophobic then this is not for you. Deliverance but not with hicks...it is OK but wouldn't want to see it in a movie.

Love Barry Eisler listened to many of his books. This one is no where near his others