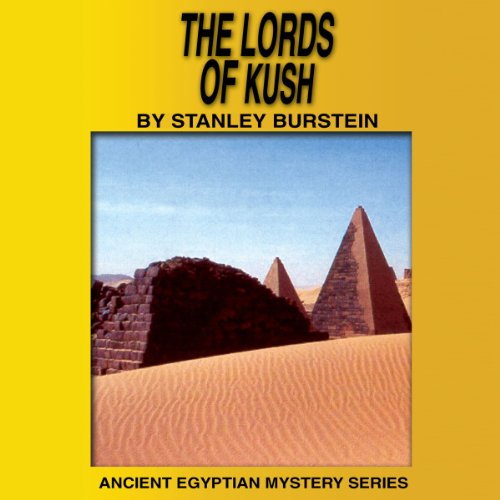 By: Stanley Burstein
Narrated by: The Staff at High Noon Books
Try for £0.00

This is the true story of how Kush (parts of modern Sudan and Ethiopia) founded a dynasty of black Pharaohs. This astonishing civilization south of Egypt developed its own distinctive pyramid and culture and overcame both Egypt and Rome. Ancient propaganda claimed victory over the barbarians of Kush, but the truth cannot be hidden forever!

The Lords of Kush is part of the Quick Read non-fiction series “Ancient Egyptian Mysteries” that engages readers of all ages. Travel to ancient Egypt and explore the facts and mysteries of how the Great Pyramid of Khufu was built, how the pharaohs of Kush took over Egypt, the religious revolution of the pharaoh Akhenaton, the process of preparing mummies, and how the Rosetta Stone unlocked the meaning of hieroglyphics.

What listeners say about The Lords of Kush (Ancient Egyptian Mysteries)

Great, but Writing Could Be Better

A great into to the history of the Nubian kingdom that the Egyptians knew as Kush. There are not many resources out there for someone interested in Kush, or African civilizations/history in general. Certainly not in audio format. Most of what you do find will offer history only as "context" and instead focus on anthropological, archeological, or sociological perspectives. It's also hard to find a good balance between the afro-centric views on one extreme side of the spectrum and the Egypto-centrists on the other extreme side.

I was overall happy with this as an overview. It's fairly short, lacks detail, and is obviously written for a high school level audience, but it has a good scope and packs a lot of good information in.

The biggest flaw is the writing. As I mentioned, it sounds like it was written for a younger audience. Highschool... maybe earlier, going by some of the vocab choices and the style of prose. For example, instead of the word "allies", the word "friends" is used throughout the book. Sentences are short and simple to the point of coming off as unsophisticated. It's fine; I just assume the book was written to be more accessible to lower grade levels.

Would love to see some higher level, more detailed works on African history (Kush and Axum in particular, but also Mali and Songhai and others) on Audible. Africa's place in ancient history is important, widely underrepresented, and poorly understood by the general population.

Love hearing new or even old history about ancient Africa. This was a nice little break and informative.