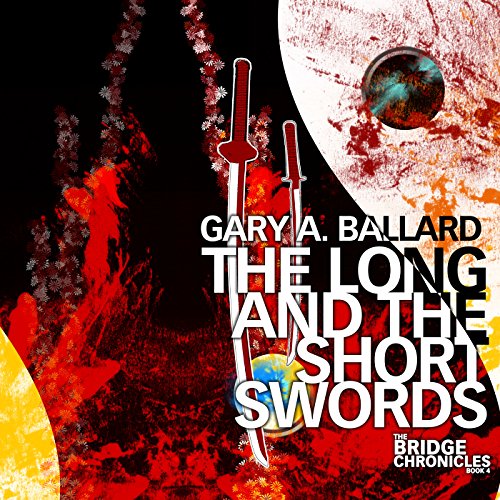 The Long and the Short Swords

The Long and the Short Swords

By: Gary A. Ballard
Narrated by: Steve Rausch

Bridge didn't get involved with his clients, especially clients who put him at risk. From the minute he spoke to the killer who called himself Logan, he knew this one was trouble. All Logan wanted was someone to forge him a new identity so he could continue running from the secrets of his past. A simple job for Bridge, hooking Logan up with a paper guy, got complicated in a hurry when his connections started turning up dead, killed by black-robed killers with swords.

To escape, Bridge and Logan dive under the radar and into the politics of the Gangland, the autonomous zone in the middle of the corporate-owned Los Angeles of 2029. Bridge must find a way to make Logan disappear before the clan of religious assassins from ancient Japan catch up to them both. This pulse-pounding thriller is the fourth in the critically-acclaimed independent cyberpunk series The Bridge Chronicles by Gary A. Ballard.

What listeners say about The Long and the Short Swords

Best book of the series so far

This was my favorite "Bridge Chronicles" book so far. I listened to the Audible audio edition, and for some reason, I found the new narrator, Steve Rausch, easier to listen to. Joe Hempel narrated the first three books, and he did a good job, but all the "street talk" was harder to listen to over extended periods with him narrating. I didn't tired of Rausch's narration like I did with Hempel's. The story itself was exciting, and I found that I was able to get into it more with this one. If there is another book in the series, I would probably listen to it in hopes that it would be more like this one.