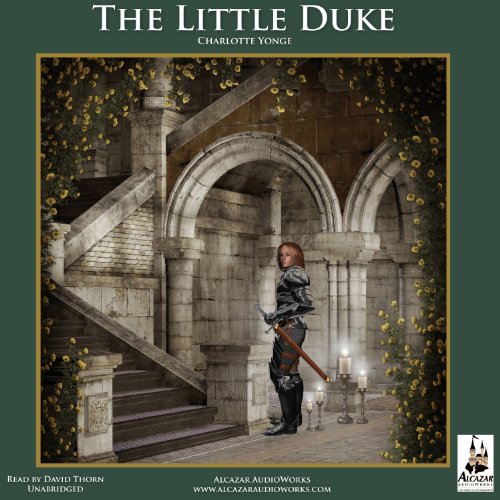 By: Charlotte Yonge
Narrated by: David Thorn
Try for £0.00

Based on historical fact, this audiobook is full of intrigue and chivalry, and at a time when Normandy was not part of France. This is the romantic childhood history of Richard the Fearless, Duke of Normandy. After his father was assassinated, when he was just nine years old, he is kidnapped and imprisoned by Louis of France who wanted to annex Normandy.

But thanks to the bravery and daring of Richard's loyal squire and knight, Osmond de Centeville, he makes good his escape. Richard's great grandson was to become William the Conqueror and King of England. The story is full of suspense and bravery, of loyalty and resolve under the most scary circumstances. Courage is a strong value for all involved.

Chapter 05: Danger in the Castle

Chapter 06: At the French Court

Chapter 07: For the Sake of a Falcon

Chapter 09: Danes to the Rescue

Chapter 11: The Passing of a Prince

Charlotte Mary Yonge (1823-1901) was a prolific British novelist, magazine editor, best known for her work in children's literature. Yonge taught Sunday School for 71 years and her novels express the same values and concerns she shared with her students, courage and self-sacrifice for a greater good.

What listeners say about The Little Duke

A Gem for your Library

This audio version of The Little Duke is gorgeous. I listened to a sample based on a recommendation from another mom and I fell in love immediately. It was really helpful to have someone familiar with both the story flow and language reading it because it makes it come alive in a way it might not if I was reading it on my own. I highly recommend it not only for the incredible story, but also for David Thorn's pristine narration.

This was a great story that is based on history. I listened to this one with my seven year old and we both enjoyed it! David Thorn does a nice job creating the voices of even the children. It is a story with a lot of adventure and human relationships. This was back when life was hard, even for the wealthy rulers. This book helps one understand what life was like back then. THis is not a book that is written at a dumbed down level. Charlotte Yonge wrote back in the late 1800's. She knew hew history and it was a pleasure to learn from her. This book has stood the test of time. We will listen to it again soon on an upcoming car trip with the rest of the family.

This was a good children's version of an interesting point in history. It gently explains the machinations of early French and Norman royalty. Bonus it was a story I was not familiar with so I learned a bit as well as one can from fictionalized historical events.

The narrator was like listening to a grandpa reading a book to his grandchildren. It was a nice warm and fuzzy experience.

Started off a little slow but my 8 year old son ended up absolutely loving it. He has brought it up a few times in conversation and I can't believe how much the story has stuck with him. My advice is to take it slow and only read a chapter a day at most. He seems to really absorb the story that way.

The beginning is hard with the details and learning the amazing characters to come. This is a great book. I used this audio as a pre-read to gain familiarity before reading aloud to my third grader.
It only lacks having read chapter breaks so I can skip between chapters - why aren’t these marked? Why is it so hard to mRk them on my own?

Great story for my History Kid

I started this book just before my son turned 6. He loves history and I’ve read him several books meant for grade schoolers. The audiobooks have been harder for him to follow due to accents and speed of the reading. I would pause the story and recap what was happening. The sentence structure is of a different era and the names are all foreign for a little American kindergartener. But he lived it and wants to listen to it all again! I also enjoyed the story and hit my old history books to read again about that time period. An older child should do better, but the vocabulary, older sentence structure and foreign names should keep the patent as a listening partner to help decipher complicated constructions. Also a good moral tale with plenty of examples of good character.

My 9 yr old really enjoyed it. I love books with a strong historical setting.

the narrator was good with using different voices

the beginning of the story was slow to get into but once the story got going it was hard to put down.