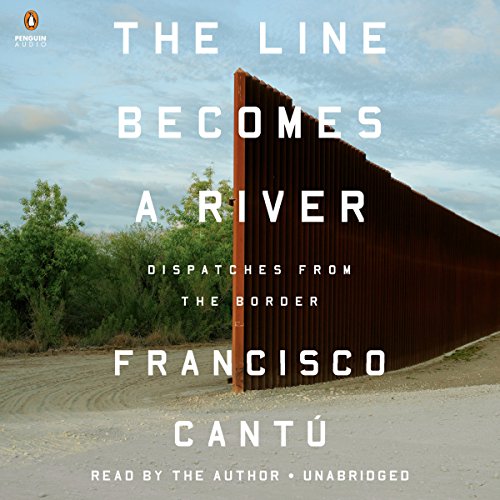 The Line Becomes a River

"A must-read for anyone who thinks 'build a wall' is the answer to anything." (Esquire)

For Francisco Cantú, the border is in the blood: his mother, a park ranger and daughter of a Mexican immigrant, raised him in the scrublands of the Southwest. Driven to understand the hard realities of the landscape he loves, Cantú joins the Border Patrol. He and his partners learn to track other humans under blistering sun and through frigid nights. They haul in the dead and deliver to detention those they find alive.

Plagued by a growing awareness of his complicity in a dehumanizing enterprise, he abandons the Patrol for civilian life. But when an immigrant friend travels to Mexico to visit his dying mother and does not return, Cantú discovers that the border has migrated with him, and now he must know the full extent of the violence it wreaks, on both sides of the line.

"Cantú's story, and intelligent and humane perspective, should mortify anyone who ever thought building a wall might improve our lot. He advocates for clarity and compassion in place of xenophobia and uninformed rhetoric. His words are emotionally true and his literary sensibility uplifting." (Barry Lopez, author of Arctic Dreams and Of Wolves and Men )

"This book tells the hard poetry of the desert heart. If you think you know about immigration and the border, you will see there is much to learn. And you will be moved by its unexpected music." (Luis Alberto Urrea, author of The Devil's Highway)

What listeners say about The Line Becomes a River

Unfortunately the author is not as good of a narrator as he is a writer. His monotone was a little hard to take, especially when you’ve become accustomed to Audible’s great narrators. I know this book took a lot of flack from both sides of the immigration debate. I don’t agree with everything the author did, but I liked the balance he provided. I appreciated the fact he was honest even about things he regrets. He talked about being a border patrol agent, how you’re trained and what you see. And he talked about a friendship with an illegal immigrant that was deported and how he was personally touched by what happened. I disagree with the long road to legal citizenship. I disagree with separating families. I’m pro immigration. But I also believe it’s important to see things in a balanced way. And I appreciated the effort of the author to do so.

An important introduction to THE BORDER

I finished this book over a month ago. I put books to rest by writing my thoughts on them in online reviews, or just for myself. It's almost impossible to contain the impact of this book in a review. Francisco Cantú has been heavily criticized for his dispatches from the border. He's a bilingual chameleon who can pass as Euro-American. He's a former agent who betrayed his Latino heritage, in spite of leaving the job. He's a man plagued by nightmares. He's a watchman of a land remote from any reach of sanity and morality.

For me he contains and translates the code of borderland as a language of pain. He does not offer solutions. Cantú simply bears witness for a people that we stubbornly warehouse with dehumanizing metaphors, with law enforcement, with drug war, with brutality and an unfathomable will to allow them to disappear into a wasteland maintained by our collective fear. One of the most haunting chapters describes the drug war killings along the border. There's a message in each mutilation, a forensic folk code intended to frighten the living into alignment with the machines that drive drug trade. This brutality seems elemental. There is another brutality we don't readily accept. Machines that drive nationhood, wealth and politics no less perpetuate the suffering and death of innocent people.

At the end of the second section of the book, Cantú quotes the work of poet and essayist Cristina Rivera Garza. Her book Dolerse, "to be in pain", crystalized the horror that Cantú has watched over as an agent. Fear and pain have risen above all other human emotions and needs, to dictate a reality that threatens to destroy our humanity. "This reality... makes us- individually and as a society-- crazy, isolated, filled with distrust for our fellow human beings, the people who share our neighborhoods, our cities, our country, our borders, our intractably and intimately interwoven global community-- the people with whom we share our very lives."

The third section of the book is Cantú's relationship with José and his family. This takes place after he leaves border patrol. Cantú is working in a coffee house, and each day his friendship with José grows from simple exchanges of conversation, food and kindness. One day José does not show up for work. After three weeks Cantú comes to know that this uncharacteristic absence from daily work, familial and community responsibility, is because José's mother in Oaxaca is gravely ill. José, a cornerstone of Cantú's daily existence, is missing, and without papers he is unlikely to return.

This connection deepens in José's absence, as Cantú makes an effort to work with José's boss, family and lawyer to secure his lawful return to a good life. Thirty years embedded within a community, José had become an integral and positive force through his dedication to a simple job, a church, his wife and his children. No one wants to abandon their life to the chance of a border propped on both sides by inhuman forces. Unfortunately all effort is lost with the verdict of José's trial. He is sentenced to a life now committed to getting back to his family, no matter the certain costs, or potential grizzly death. For José, love trumps all other forms of power.

In the epilogue Cantú goes against the safety notices all along the North American side of Big Bend National Park. He enjoys an excursion to the other side on horseback that culminates with a delicious breakfast in beautiful Boquillas. When he asks the border merchant and guide about safety, he responds, "Here the law comes from the people. We look out for one another, me entiendes?" Later as Cantú swims the Rio Grande, he is surveyed by two long nosed gars, prehistoric fish present in North America for about 100 million years. "The waters of the river flowed pale and brown, liquid earth washing over [him] like so many human hands, like a skin unending... until finally, for one brief moment, [he] forgot in which country [he] stood. All around [him] the landscape trembled and breathed as one."

If I could change one thing about this book, it would be to include an extensive bibliography for further reading. Don't just read The Line Becomes a River. Read Cristina Rivera Garza, Jesús Valles, Javier Zamora, Sonia Guiñansaca, Vanessa Angélica Villareal, Sara Uribe and many more. The border that separates North America from the rest of the continent separates us from a shared humanity. Don't look away. Dive deeper into the river.

A necessary read, I am thankful for

Where do I start?
Every minute of this audio book was powerful.

It is a raw, honest, and heartfelt view of the boarder. It is so eye opening and highlights the humanitarian crisis that happens daily.

I am in tears, of joy and hope.

He put a name, a familiar story to people that cross our boarders.

These stories matter, their names matter.

They are all of us, we are all connected and this book will wake you up and make you realize that.

So thankful I heard him on NPR and found this book.

I am making everyone I know read it. Listen to it .

Sad, how true it is

Told with great empathy. I worked, volunteering, with detainees at a detention center to complete forms, file papers, find sponsors, contact families. Most were deported. I'm in contact with many. All Africans who had traveled via Brazil, then up the West coast of South and Central America, through Mexico. Many of their friends died along the way.
Always wondered if there was an agent..border... ICE, detention, who had real empathy. And I'm still waiting for immigration reform. But it's too easy to keep the system going, to blame the victims for all wrongs.
Would love to meet the author.

Such a powerful message

I don't know what the answers are, but this book begs for answers for this painful, angry subject. more people in power need to see these people as people, not things to be dealt with.

A well written book that is a must read for dreamers, and really anyone who in not Native American, because we all came from somewhere else. This book is only a small glimpse at a very complex and complicated problem. Immigration. Our elected government must not continue to ignore this problem as it grows with the passage of time. Thank you Mr.Cantu for sharing your experience, for choosing to remain a member of a human race with a heart and a conscience and to your mother for raising the man you have become. Gracias

Better than expected,; No "Politics"

I believe illegal entry into the country needs to stop. I support a wall or what ever changes allow us to process and document knowingly those who enter.
I also believe the way we conduct border policy favors criminals and hurts the kind of people we need to make citizens.
This story is a personal, informed account demonstrating the troubles with our border policy and how those issues directly affect good people in the wrong way.
Clearly we have policy issues. There must be changes to make it reasonable to keep the right kinds of people in this country while keeping the bad out.
Loved the candor of this book..

An amazing story from an author who has lived and experienced the full gamut of life on the border. My hope is that his story begins to open up a chapter in this country of immigration reform and change. Truly a great and informative read.

Explains so much. all sides. very informative. science, culture, inheritance, story, all of it about the boarder with Mexico

What did you love best about The Line Becomes a River?

I appreciated and enjoyed the inclusion of border history/formation with his modern day story. thanks.