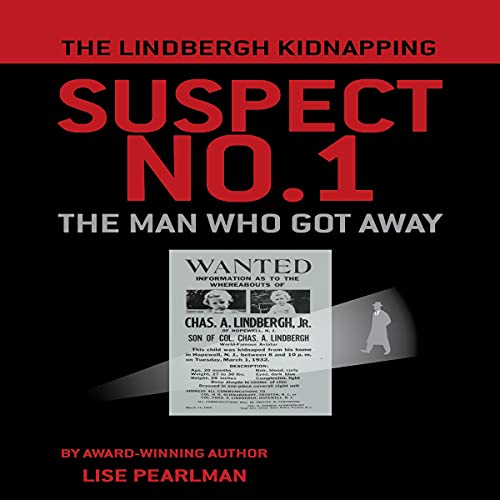 The Lindbergh Kidnapping Suspect No. 1

Astonishingly more key evidence is accessible today than was presented at the death penalty trial of Bruno Richard Hauptmann for the kidnap/murder of Charles Lindbergh, Jr. You get to judge for yourself who committed the "crime of the century".

This shocking but true story is told in dozens of short, riveting chapters you can't put down. In the depths of the Depression, millions worldwide followed every twist and turn of the Lindbergh baby kidnap/murder. Yet what was reported was largely fake news. Nearly a century after undocumented immigrant Bruno Richard Hauptmann was executed for the dastardly crime, questions still linger.

If the wrong man was convicted, who did it? When? Why? Where? How? The shocking answers this audiobook suggests have eluded all prior authors. Extensive research into dusty archives yielded crucial forensic evidence never before analyzed. Listeners are invited to reexamine "the crime of the century" with fresh eyes focused on a key suspect - a slim man with a fedora partially obscuring his face, who was spotted with a ladder in his car near the Lindberghs' driveway that fateful night. The police let an insider who fit that description oversee the entire investigation - the boy's father, international hero Charles Lindbergh.

Abuse of power, amorality, and xenophobia all feature in this saga set in an era dominated by white supremacists and social Darwinists. If Lindbergh was Suspect No. 1, the man who got away, what was his motive? Who else was involved? Who helped cover up the crime? Listen to this audiobook, and judge for yourself.

What listeners say about The Lindbergh Kidnapping Suspect No. 1

Good, not great, needs to be abridged

I'll give it 4 stars because 3 seems harsh. Perhaps 2/3rds of the book moves along at a good pace, and provides interesting listening. It's that other 1/3rd (a conservative estimate) that creates a problem. There's no risk of spoilers, as the title character is fairly obvious, and even stated in the summary. However, it seems the author went out of her way to provide details on tangential aspects of the man's life. That eugenics plays a part is well known, though the extent of the medical experimentation engaged in by Suspect No. 1 may be a surprise to some. But it's not about the kidnapping, nor the investigation, nor the framing of Hauptmann. It is merely an elongated backstory to provide motive to the author's theory of the crime. And it could have been done in a chapter. As it is, nearly the entire "Act 4" of the book is extraneous.

The author does make a compelling speculation about how and why the crime was committed, and that rates the stars. But cutting several hours from the medical experiments and organ transplants would do wonders for the briskness of the story. Also, not terrible narration, but the author would have been wise to have used a more dynamic speaker.