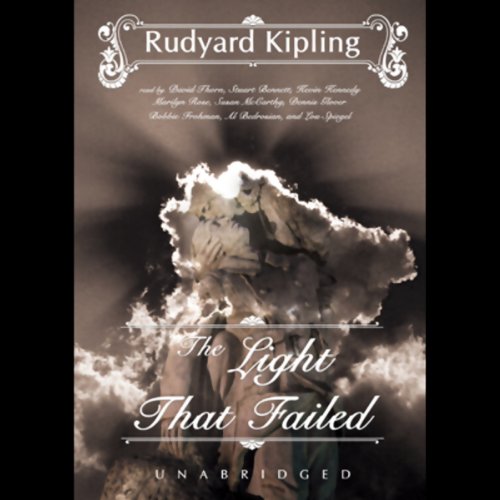 The Light That Failed

By: Rudyard Kipling
Narrated by: David Thorn,Stuart Bennett
Try for £0.00

Dick Heldar is a war correspondent and an artist, well known for the drawings he sends home to the London papers from wars in exotic places like Sudan. When he returns to London, he attempts to make a career for himself as a serious artist and re-encounters his childhood sweetheart, Maisie. He then learns that a minor problem with his eyes is actually the onset of an incurable blindness, the result of a head injury during the war. As his vision fails, the light of everything around him, his life, hopes, and dreams, fails with it. Terrible choices must be made between the love of a woman and the love of the men who stood by him at the front.

Kipling won the Nobel Prize in Literature in 1907 in consideration of his power of observation, originality of imagination, virility of ideas, and remarkable talent for narration.

What listeners say about The Light That Failed

It's difficult for an English listener to tolerate bad US actors mangling English accents. I'm sure it's no easier for Americans to put up with terrible accent work by British actors. This is a very singular example, however. The story relies on the very English Englishness of the doomed protagonist, facing down the enemies of Empire with a patrician sneer, and when he is voiced by a sub-literate native of the USA it is very very wrong. The narrator is alright, but the character voices are awful. And additionally they mis-read constantly. One-take recording by badly prepared performers. I couldn't bear to listen. But fortunately, I downloaded the novel on Kindle, so I finished it that way.