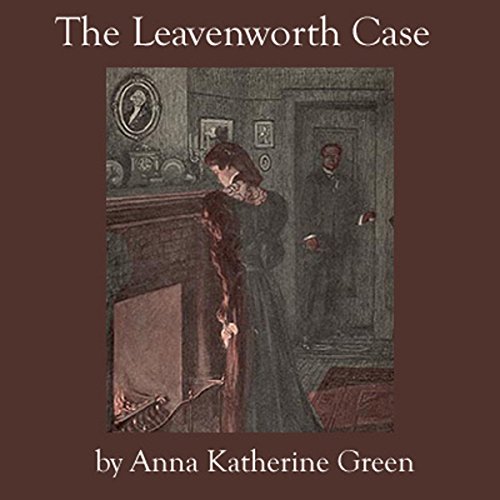 Anna Katharine Green was an American poet and novelist. She was one of the first writers of detective fiction in America and distinguished herself by writing well plotted, legally accurate stories. She is generally regarded at the author who inspired Agatha Christie to begin her writing career.

Although she was a best-selling author, and published 40 books, her first mystery, The Leavenworth Case, turned out to be her best. It was an overnight success that sold 750,000 copie - a huge amount for that time. The book was praised for the mastery of legal points and was used at Yale University to demonstrate the fallacy of circumstantial evidence. It was made into a critically acclaimed movie in 1936.

Horatio Leavenworth is a New York merchant whose material wealth is matched by his eminence in the community and reputation for good works. He is also the guardian of two striking nieces who share his Fifth Avenue mansion. Mary, her uncle's favorite, is to inherit her uncle's fortune at his death. As this mystery opens, that lamentable event has just occurred. Leavenworth has been shot to death and circumstances point to one of his young wards.

What listeners say about The Leavenworth Case

This is absolutely huge in the development of the mystery novel. The plot and the characters are well developed. You'll here the detective state fundamentals of detection that have been picked up and used ever since.

The writing is old fashioned, but it's terrific. The narration is adequate. I strongly recommend this to anyone who loves mysteries, especially classic mysteries. I really wish the rest of Anna Katherine Green's work was available on Audible.

I started to read this book on the recommendation of an attorney friend who said it had excellent "lessons" concerning the use of circumstantial evidence. I just didn't have the time to get far so I decided to get the audiobook and listen on the drive to work. Sampled both audio versions and was surprised to hear that one of them ( not this one ) was read by a woman. I know this was a breakthrough book for women but....the first person narrator is a man so...I thought that was odd. Anyway, I got this version one and enjoyed it very much. Old fashioned but I like that - and the reader did a good job.

Not bad, if dated

A very good story in its day, and with some good twists, though the writing is a bit heavy and old-fashioned for a modern reader. Worth a credit if you like period fiction. The reading is rather bland, but serviceable.

Would you try another book from Anna Katherine Green and/or Jim Killavey?

Has The Leavenworth Case turned you off from other books in this genre?

The performance was fine for this book.

What character would you cut from The Leavenworth Case?

All of the characters were unremarkable and forgettable.

The book was pretentious and stilted in its use of words. I kept wishing the author would just get on with it.