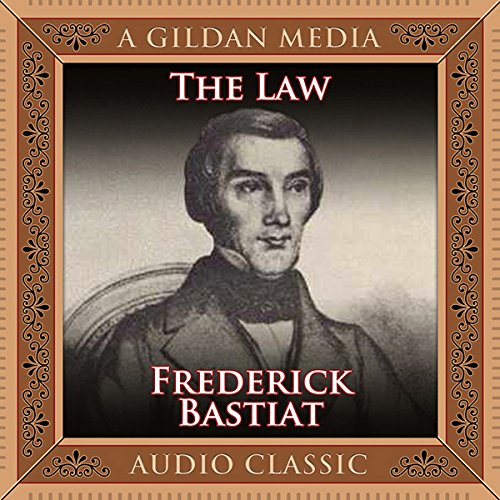 The Law was originally published as a pamphlet in French in 1850 by Frederic Bastiat. It is his most famous work and was written two years after the third French Revolution of 1848. It defines, through development, a just system of laws and then demonstrates how such law facilitates a free society. Bastiat was a French classical liberal theorist, political economist, and member of the French assembly. He was notable for developing the important economic concept of opportunity cost. He was the author of many works on economics and political economy, generally characterized by their clear organization, forceful argumentation, and acerbic wit.

Born in Bayonne, Aquitaine, France, Bastiat was orphaned at nine and became a ward of his paternal grandparents. At 17, he left school to work in his family's export business. Economist Thomas DiLorenzo suggests that this experience was crucial to Bastiat's later work since it allowed young Frédéric to acquire first-hand knowledge of how regulation can affect markets. When Bastiat was 25, his grandfather died, leaving the young man the family estate, thereby providing him with the means to further his theoretical inquiries. After the middle-class Revolution of 1830, Bastiat became politically active and was elected justice of the peace in 1831 and to the Council General in 1832. He was elected to the national legislative assembly after the French Revolution of 1848. His public career as an economist began in 1844 and was cut short by his untimely death in 1850.

this could have been written last week. the topics discussed, the warnings sounded and the defense of choice/individualism is laid out with pinpoint accuracy. I would suggest listening several times and buying the hardcopy for reference purposes.

Bastiat's "The Law" is the eye opener, the gateway to liberty. I don't think he probably even goes far enough. Where he stops short though, his successor, Gustave de Molinari ended up going the distance. "The Law" will press you though to think about morality and the thoughtless acceptance that we have given to the State.

one of the most important works on this millennium

must read by everyone sane sentient and cognitive! while the concepts are weighty they are the cornerstone of society. Bastiat is the perfect answer to Marx and the modern progressives.

The Principles of Liberty explained.

What made the experience of listening to The Law the most enjoyable?

It is exciting to know that his ideas were part of a Political movement that gave birth to the Constitution and the Bill of Rights.

Every word he writes if applicable to today's issues.

What???s the most interesting tidbit you???ve picked up from this book?

He explains the principles of Liberty and how a society can deteriorate into tyranny without following these principles.

A necessary read for understandings

Give me liberty or give me death!
I'm going to read this to my kids and grandkids

This is a MUST READ! It should be read by everyone alive. It amazes me that this was written in 1850. The perversions if the law are taking place all around us right NOW. How long before the uprising begins?

Would you consider the audio edition of The Law to be better than the print version?

Bastiat surely was one of the best classical liberal philosophers in western history. "The Law" is a piece that will surely be remembered by freedom lovers for many, many years to come.

The only downside to this audiobook is nasally whine in Synnestvedt's voice. It was, at times, difficult to listen to.

Essential Reading for Everyone

What are the purposes of the law and what are its limits? These are the questions Bastiat raises, and his answers written in 1850 are as relevant as if they'd been written in 2012. I won't attempt to summarize his theories, except to say whether you're Republican or Democrat, your problem is less what laws you want to enact than whether they'll work if you manage to get your way.

The audio version is only slightly marred by the fact that the reader seems to have a speech impediment. Bastiat frequently uses the word "plunder" to describe misuse of the law, and in the audio version it sounds like "plunderer." Same with other words that end in "r." I even bought the print version just to see what he was saying.

Bastiat was obviously a brilliant thinker for his age and a must read for our age; however, best to skip this rendition as the reader added inflections and a odd cadence that made the book unlistenable to me. Getting a different edition after I return this one.

good if you are a libertarian

liked it but it gets long. I would suggest reading it though. all and all good book.