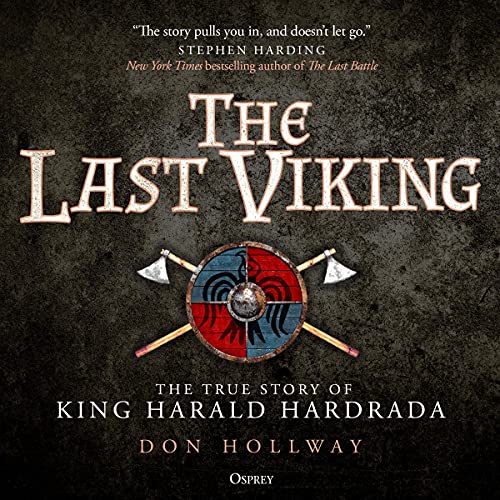 By: Don Hollway
Narrated by: Mark Meadows
Try for £0.00

Harald Sigurdsson burst into history as a teenaged youth in a Viking battle from which he escaped with little more than his life and a thirst for vengeance. But from these humble origins, he became one of Norway’s most legendary kings. The Last Viking is a fast-moving narrative account of the life of King Harald Hardrada, as he journeyed across the medieval world, from the frozen wastelands of the North to the glittering towers of Byzantium and the passions of the Holy Land, until his warrior death on the battlefield in England.

Combining Norse sagas, Byzantine accounts, Anglo-Saxon chronicles and even King Harald’s own verse and prose into a single compelling story, Don Hollway vividly depicts the violence and spectacle of the late Viking era and delves into the dramatic events that brought an end to almost three centuries of Norse conquest and expansion.

"Riveting! [Listen to] this [audiobook] and be prepared to see it through to the end. Fascinating and thoroughly engaging!" (Edward Zapletal, History Magazine)

"The Last Viking is a masterful and pulse-pounding narrative that transports the [listener] into the middle of the action." (Carl Gnam, Military Heritage)

"The story pulls you in, and doesn't let go." (Stephen Harding, New York Times best-selling author of The Last Battle)

What listeners say about The Last Viking

the narrator makes the book a bore