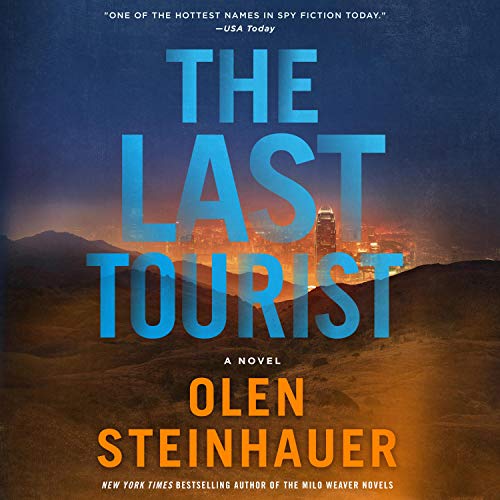 By: Olen Steinhauer
Narrated by: David Pittu
Try for £0.00

“Stunning.... Steinhauer reinforces his position at the top of the espionage genre.” (Publishers Weekly, starred review)

A decade later, Milo is hiding out in Western Sahara when a young CIA analyst arrives to question him about a series of suspicious deaths and terrorist chatter linked to him.

Their conversation is soon interrupted by a new breed of Tourists intent on killing them both, forcing them to run.

As he tells his story, Milo is joined by colleagues and enemies from his long history in the world of intelligence, and the young analyst wonders what to believe. He wonders, too, if he’ll survive this encounter.

After three stand-alone novels, Olen Steinhauer returns to the series that made him a New York Times best seller.

"Olen Steinhauer is one of the most talented of the new generation of spy writers. His characters are nuanced, his storylines rooted in today’s headlines but with added zing, like a burst of citrus in a dry Martini...the skill of Steinhauer’s writing makes this much more than a standard chase thriller." (Financial Times)

What listeners say about The Last Tourist

This was a well written story with excellent characters spoiled when the author and narrated decided to introduce a political far left hatred of the current President of the USA - probably my last Olen Steinhauer - the first three of four were also excellent without the in youR face politics - orange man bad - capitalism bad. 🥴

Book 4 in the Milo Weaver series comes 8 years after Book 3, yet THE LAST TOURIST assumes the reader/listener remembers key facts from the first three books. This is an overly complex novel that seems to be going nowhere much of the time. On the positive side the world political situations as presented in The Last Tourist closely resemble the actual situations. Although the novel is part of the Milo Weaver series strangely Weaver is not the protagonist. The real protagonist is a young CIA analyst named Abdul.

I need to come back and review more...

It just wasn't top shelf Steinhauer and not comparable to le Carre. I liked it, but there wasn't that spark that I keep hoping to find in Steinhauer. His first books were SO GOOD. His last have been solid, but feel sterile. Smart but with antiseptic characters. I'll leave it at that for now.

Another author who's succumbed to trump derangement syndrome. I read for entertainment, not to hear a authors views on global warming, immigration, so on. This series had a strong start but, each book has gotten more far fetched with grandiose plots. Count me out moving forward, done with this leftist hack.

Disappointed After a Long Wait

I’ve loved every other book that Steinhauer has written. All five stars. This one however was too dependent upon books written almost ten years ago. It certainly couldn’t be a stand alone novel and of course it wasn’t meant to be. Too choppy, moving parts that didn’t flow like his previous works. Nothing like his “Bridge Of Sighs” series that meshed wonderfully. I still look forward to his next one.

Sad when a good story is ruined by political dogma

I listened to both of the first two in the series and while a little of the author's politics showed through, it was tolerable.

This one was way different. I almost didn't finish it. Basically, this author is a communist lefty. The US is a colonizing evil entity with run amok capitalism killing innocent people with impunity, while the good guys are a far left coalition including a secret United Nations agency, Russia, and China.

Populists are all authoritarians. Trump is evil. America is evil and racist. America needs open borders. A small group of intelligence people save the day. Don't waste your time.

Steinhauer is distracted or has lost his touch

The first three Milo Weaver novels are among my favorite intelligence/black ops thrillers. All are excellent, though The Last Exit is best in class. The Last Tourist does not measure up in any respect - plot, characters, story. It wanders into policy territory unnecessary and undermining the power struggles of this genre. Mr. Steinhauer, please focus and give us your best writing, not this pedestrian effort.

So good to have Milo Weaver back! Once again Olen Steinhauer has woven a riveting story that's kept me not only riveted but up way past my bedtime.

I am so happy Milo Weaver and crew are back. This was a deeply involved story with many twists. Steinhauer did well. The narrator is superb.

Hard to turn off.

Great to have Milo back. Complex and up to date with our current international environment.