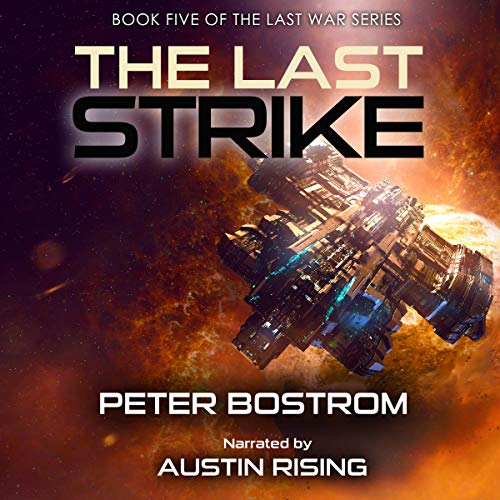 By: Peter Bostrom
Narrated by: Austin Rising
Try for £0.00

His son is dead. His ship is dead. His career is dead. But Spectre is very much alive. And with his plans of galactic domination laid bare, Captain James Mattis must gather what allies he can to stop him.

Admiral Pippa Spears and the HMS Caernarvon make a mysterious discovery in the wreckage of the USS Stennis, one that could change the outcome of the war. And in the uproar after the assassination of the American president, she and Captain Mattis race across the galaxy after the suspected shooter, knowing full well the murder is another of Spectre's schemes to throw them off guard while he carries out his sinister plans. Plans that Mattis and Spears are close to unraveling.

The cost of failure is unthinkable: a destroyed Earth and an unstoppable, immortal foe.

What listeners say about The Last Strike

I need a 7th book plus more!! There is so much other detail that needs explaining

I liked the book, the Peformance was realy good,
The any problem is the wait time between books, a year between books is too long. I would like to see more book alot fast.

I really enjoyed listening to Peter Bostrom's book. Full of action, exciting intrigue and clones from the future. The Narrator is gifted and an excellent speaker. Really good book, it will hold your interest from beginning to end.

The story picks up with Jack having just gone through his Court Martial for the events that happened in part 4. Jack is no longer an Admiral, having now been reduced in Rank to Captain Jack Mattis, as well as grounded, no longer being able to be in charge of a US Warship. This is nothing though compared to the loss of his son Chuck.
At the start of the book, Jack is spending time with his Son-in-Law Elroy, and his Grandson, when he is approached by Captain Pippa Spears, Captain of the HMS Caernarvon of the British Navy. She has made some inroads into the wreckage of the USS Stennis and wants to get Jack’s help, in multiple areas, including tracking down the Reardon Brothers.
Whilst this is going on, the US President is shot dead, sending all of the US forces into a frenzy. As a side plot in this book, Special Agent Denelle Blair of the FBI, who is looking at a rather boring career, but needs a break, is introduced when the President is killed as she thinks she sees leads between Jack, Chuck and everything in their circle and what is happening with the President, and she wants to be the one to solve the mystery first and earn a gold star.
There are a couple of ‘New’ Characters in this book, with the crew of the Caernarvon being introduced, and a rather new style of commanding, something Mattis finds amusing once aboard. With the English crew, the feel of the ship is vastly different to the US ships we have previously seen in other books, making this feel like a slightly different story than the previous 4.
The basic concept of the story hasn’t changed though, with Jack trying to find Spector and the Avernus (the future Humans) and preventing the destruction of the human race as it is now. He just has some help from the crew of the Caernarvon.
I was rather critical of part 4, as I said, when you pick up one of these books, you want some good action, good characters etc, and 4 didn’t deliver, as well as losing its way with the plot lines.
In Part 5, the Author appears to have tried to rectify some of these issues. For starters, there is some amazing ship to ship combat, and Bostrom does an exceptional job of describing this, bringing the scene to life. However, the real difference has been in the story lines, were he has focussed on trying to bring together some of the more convoluted points and streamline them. The introduction of the Special Agent at first seemed somewhat odd, as why would a land based FBI agent be of any use in Space? But as you go on, you do find out, and it is these little things that have made such a difference in Part 5, were things were more believable, less messy, and to be honest, it was a lot more fun to read. Which is what it’s all about!
Overall this is a great read, Jack is hunting a new set of clues for Spector, and Future Humans, with the help of Captain Pippa Spears, who is by far one of the best characters so far in the series. There are multiple other fantastic characters from the crew of the Caernarvon that are brilliant adding a very ‘British’ feel to the book, and we get a better understanding of the entire Lieutenant Corrick ‘Guano’ plotline as well. There is also new characters such as Special Agent Blair who add some real fun to the story, and the Reardon Brothers also get their fair share of page time to really add to both the action and the amusement value.
Book 5 won’t disappoint, for those that were concerned after book 4, it is well worth the read, and if you haven’t picked up the series yet, then you should!
One of the highlights of this Audible Series has always been the Narration. Austin Rising again returns after replacing Steve Jones for the first 3 volumes, but this does not affect the series, as Rising has a fantastic voice for narrating Sci-Fi of this style, with its epic space battles, fast paced bridge scenes, desperate last minute acts of heroism from characters aboard starships, or on the ground as they try desperately to thwart some plan or another. Rising 'rises' (I'm sorry, I couldn't resist!) to the occasion, with great voice overs for all the main characters, even managing a passable British accent that doesn't leave your skin crawling every time you hear it (which is probably good considering the amount Spears is heard in this episode). The Narration is excellent, and this is well worth listening to, I would go so far as to say, it is worth listening to rather than just reading, as the Narrator does give it an edge.
Lots of fun for those of us that enjoy Sci-Fi.