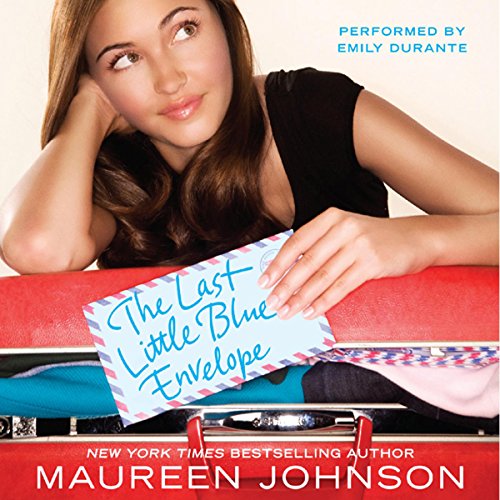 By: Maureen Johnson
Narrated by: Emily Durante
Try for £0.00

Ginny Blackstone thought that the biggest adventure of her life was behind her. She spent last summer traveling around Europe, following the tasks her aunt Peg laid out in a series of letters before she died. When someone stole Ginny's backpack - and the last little blue envelope inside - she resigned herself to never knowing how it was supposed to end.

Months later, a mysterious boy contacts Ginny from London, saying he's found her bag. Finally, Ginny can finish what she started. But instead of ending her journey, the last letter starts a new adventure - one filled with old friends, new loves, and once-in-a-lifetime experiences. Ginny finds she must hold on to her wits... and her heart. This time, there are no instructions.

What listeners say about The Last Little Blue Envelope

Review: I really wanted to read this book after having read thirteen little blue enveloped last year,no need to know what happened to the last blue envelope and I wanted some more Maureen Johnson, having really enjoyed the previous book. Firstly, I made the mistake of downloading this as an audiobook again. It is so hard to try and enjoy a novel when the narrator clearly can't do any accent that isn't general American, and this bok has English, Irish, Scottish and French accents, a lot of which came out sounding decidedly Asian or just plain comical.

I was pretty disappointed with the way this book turned out to be honest. It recycles a lot of the material from the first novel, travelling around, looking for items to fulfill her aunts wishes, and we actually never get to hear the final letter in its entirity! The whole concept centres around someone holding the letter hostage and essentially blackmailing ginny to travel to different countries to him so that he can get some money out of her, very blizzare and not entirely a safe thing for a young girl from a different country to be doing!

Thank goodness for Keith, that's all I can say. The loveable rogue that Ginny met in the original novel is back and just as funny as ever. The only problem is that he is no longer signal, of course this involves a whole heap of problems from Ginny and I really did enjoy this element of the storyline-YEY! The journey that they go on has comical elements too and the storyline is definitely fast paced, I was just pretty disappointed that the storyline wasn't as exciting and meaty as I the first novel. Any elements of audiobook faults aside, I didn't feel wowed by this book but I am glad that I read it to find out what happened next to Ginny and Keith and the fact that I didn't entirely enjoy this novel. Won't out me off reading other books by Maureen Johnson in the future-I already have the next one lined up and ready to go!

I really loved reading this book. It's a really good book I would recommend it and the first one.

Would you consider the audio edition of The Last Little Blue Envelope to be better than the print version?

What was one of the most memorable moments of The Last Little Blue Envelope?

every moment of it was good but Paris was the best

she feels the characters and I can recognize them

If you could rename The Last Little Blue Envelope, what would you call it?

a Task to Complete

I have read this book so many times but I do not have the time to sit down with a good book these days but I can listen and it was great. The only thing I did not like was the narrator, I found her annoying.

Ups.. Rating based on first book

I read wrong in the title. And have not listened to this book yet. How you I delete my rating??
Correct review and rating.. When I have listened to it :)