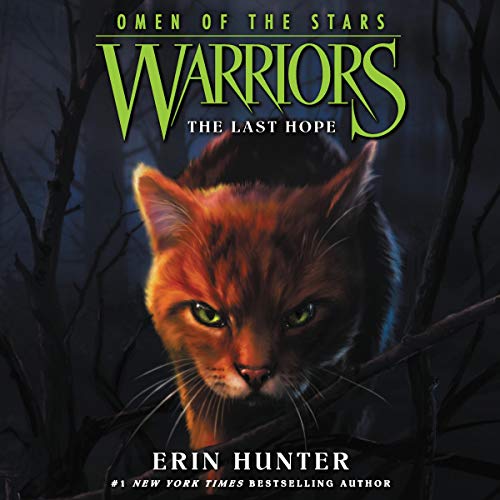 The final book in this fourth series, Warriors: Omen of the Stars #6: The Last Hope, brings more adventure, intrigue, and thrilling battles to the epic world of the warrior Clans.

The battle between the Dark Forest and the warrior Clans has arrived. Jayfeather, Lionblaze, and Dovewing wait desperately for the fourth cat who is prophesied to help them - and who may be their only hope for survival.

What listeners say about The Last Hope

it was amazing and dark but you HAVE to read th other series to understand. I highly recommend

I love Warriors! It's so fun and exiting!

I am so sorry that Firestar died, but as the book says life must go on no mater what happends. I think I like Warriors because of that parts.

By far the best of all thus far!

RIP Fireheart/Firestar! 😭😭😭😭. I will miss you. Can't wait for the movie to come out!

Amazing book!
I think this book deserves an a+.it was one of my favorite books I've ever read in my life.
hope the next one will be as good😺

I really didn't like the voice given to Jayfeather... Nevertheless, it was a great performance from all narrators/readers. I just got the Big Sad from this book, but I guess that's what I get for attaching to our favorite orange boi and others

I started reliving my childhood on my drive to work with these audio books, couldn’t be happier!

Good but very sad when Firestar dies but over all a Amazing story I,m glad that that the Darkforest was defeated.

I've always loved the Warriors books, but this one was by far one of the greater books in the series. And the narration is so amazing. McLeod Andrews is a top-notch narrator. I love his portrayal of each cat, and of course the many voices he pulls off. Absolutely fantastic!

I have listened to all the rest of the books and this one really has a fantastic ending! I love how at the end of the book it tells you the Prophecy- (I only wish it could have included them all- from the first book to this book) And I think the person who reads this is great! He can really get a lot of emotions into his words and express feelings! A lot of other people sound kinda robotic when they do it but he does a great job being very smooth. Not once has he seemed to sound board even reading all of the books (But some of the supper editions). I love how they bring back old characters from even the first book- it gives you that feeling - where it’s so amazing to see those cats again when you thought you mite never see them! It also leads up to this battle for a long time not giving away to much of this moment but enough so you stick around until you get to see/hear it. The describing words really paint a picture in your mind as if for a moment you feel like you are that cat- Streaming threw bramble bushes- launching into a camp- into battle. Losing urself into a great book! I like all the cats they used- their personality. For example Ivy Pool. It gives you that feeling of jealousy but when the time was right the Character changed their mind transforming their mind into forgiveness realizing what she was doing was wrong. And I used to hate HolyLeaf but they really changed my own mind about this cat when they returned seeing that all the time they had alone seemed to have taught her something.

Nice story, not so nice speaker.

I like the story, it’s pretty good. Not great but not horrible. The person who recorded the audio however, was kind of confusing. The voices he used, especially for Jayfeather, honestly hurt my ears. He also skipped over some sentences or shortened them. Which I guess isn’t a huge deal but in trying to teach my niece how to read and she is trying to follow along with the book, so this isn’t helpful.