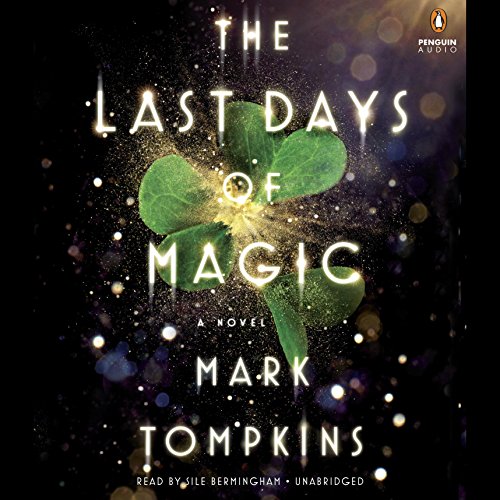 The Last Days of Magic

What became of magic in the world? Who needed to do away with it, and for what reasons? Drawing on myth, legend, fairy tales, and biblical mysteries, The Last Days of Magic brilliantly imagines answers to these questions, sweeping us back to a world where humans and magical beings coexist as they had for centuries.

Aisling, a goddess in human form, was born to rule both domains and - with her twin, Anya - unite the Celts with the powerful faeries of the Middle Kingdom. But within medieval Ireland, interests are divided, and far from its shores greater forces are mustering. Both England and Rome have a stake in driving magic from the Emerald Isle. Jordan, the Vatican commander tasked with vanquishing the remnants of otherworldly creatures from a disenchanted Europe, has built a career on such plots. But increasingly he finds himself torn between duty and his desire to understand the magic that has been forbidden.

As kings prepare, exorcists gather, and divisions widen between the warring clans of Ireland, Aisling and Jordan must come to terms with powers given and withheld, while a world that can still foster magic hangs in the balance. Loyalties are tested, betrayals sown, and the coming war will have repercussions that ripple centuries later, in today's world - and in particular for a young graduate student named Sara Hill.

The Last Days of Magic introduces us to unforgettable characters who grapple with quests for power, human frailty, and the longing for knowledge that has been made taboo. Mark Tompkins has crafted a remarkable tale - a feat of world-building that poses astonishing and resonant answers to epic questions.

"Simultaneously sweeping and intricate.... Tompkins's amazing debut novel conjures an epic battle for the soul of Ireland. Filled with papal machination and royal intrigue, magic and mayhem, faeries, Vikings, legates, kings and queens, angels and goddesses, this is one wild and breathless ride." (Karen Joy Fowler)
"Plundering the treasure chest of human myths, from mysterious biblical giants to ferocious Celtic faeries, Tompkins has created a fantasy adventure with the shifting perspectives of dreamscape. A novel rich and strange." (Geraldine Brooks)

What listeners say about The Last Days of Magic

I wasnt sure about this book when i read the summary, but I have always had a pull toward books about the fae, magic, etc, so I figured I would give this a chance - I hadnt realized how many historic figures were also part of this story, and that made it quite interesting :) Makes you ponder at least a little, if there really are fae :)

Great fun to spend a few evenings in the faerie world that Tompkins has created so masterfully. I was especially intrigued with the way he weaves his story into actual history. I look forward to learning more about the era. And I can't wait for the sequel! Ms. Bermingham read wonderfully.

Love the reader's voice! She does a great job with both make and female roles. She does read a bit fast, but it's in pace with exciting events in the book. I love how steeped in historical accuracies and dripping with conspiracy and theology the author brings it all together synergistically in a beautifully woven enchanted tale for adults! I also love the sexual liberation in the mind set of the people of this time.

What a fun story. Excellent. I love it. Wish I could give it 5 stars. But sometimes the author talked about characters in a narrative that was a tell-don't show Wikipedia entry, as in this happened, then this, then this. It felt a little clinical. The author excelled when he developed the characters and made them real people you could root for. As the story began to wind down, it seems he used more narrative than character development to wrap up events, and it made the fates of those characters less compelling than if more time (and words) would have been devoted to conveying their stories.

hard to listen to at times

not sure if it was the narrator or the story line... maybe both... but, this wasn't the greatest book I've listened to

I could only listen to it for 2 hours.

Would you try another book from Mark Tompkins and/or Sile Bermingham?

Something narrated by Davina Porter Or Susan Ericksen

Her lisp was distracting, I kept waiting for it to go away or maybe I would get used to it but the lisp combined with her Dublin accent was too much.

What character would you cut from The Last Days of Magic?

I didn't get into it that far be cause the character development was poor. I couldn't care about any of the characters.

The book was recommended by my favorite author, Diana Gabaldon. Usually her recommendations are wonderful to read but I just couldn't make myself like this story.

The narrator used so many different and strange accents it was difficult to follow the story. I found it distracting and frustrating.

I couldn’t finish this book (really couldn’t even get into it), the narrator was awful.

Was I missing chapters? It seemed as if there was only 2-3 chapters set in the modern world, almost like the book was originally just set in the past and as an afterthought, the first and last chapters were added. I couldn't really enjoy the story, because it felt like something major was missing, I'm sad to say. The narrator was good, but the story felt disjointed and as I said the first and last two chapters felt like a definite afterthought

The narrator's lisp is excruciating. First audiobook that I've ever had to stop listening to.